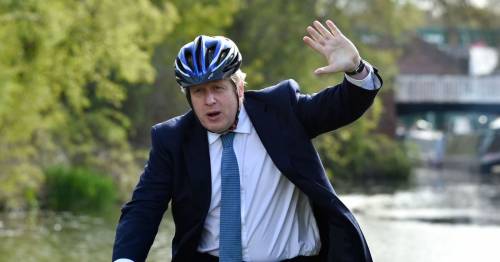 US President Joe Biden has given Boris Johnson a new American-made bike and helmet to mark their first meeting.

In a formal exchange of gifts, the Prime Minister gave the President a framed photograph of a mural of American abolitionist Frederick Douglass.

Douglass, a former slave who became a leading figure in the abolitionist movement, travelled to Britain and Ireland in the 1840s on a speaking tour.

The mural was by Robert Blair and the photograph was taken by dual British-American national Melissa Highton. 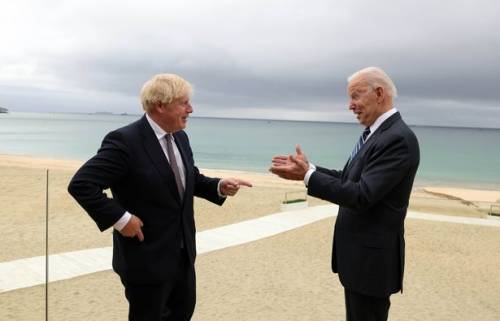 Boris Johnson and Joe Biden met for the first time at the G7 summit in Cornwall
(Image: Andrew Parsons / No10 Downing Street)

The PM's spokesman said: “Du Maurier spent much of her life in Cornwall where most of her works are set.”

Mrs Johnson received a leather tote bag made by military wives and a presidential silk scarf from Dr Biden.

As the PM and the President held talks, their wives watched little Wilfred Johnson frolic on the beach – accompanied by scores of police, security agents and Royal Navy sailors.

The beaming spouses paddled barefoot in the surf as the 13-and-a-half month-old toddler– sporting wild, blond Johnsonian locks – sat on the shore.

With the wives' fashion choices under the microscope, Mrs Johnson opted for a red mid-length dress, which experts said was a £325 gown by London-based designer LK Bennett. 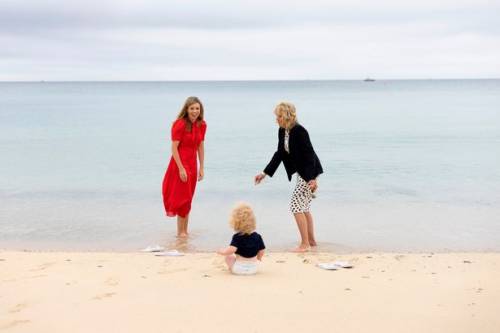 Carrie Johnson and US First Lady Jill Biden paddled on the beach with the PM's son Wilfred
(Image: Simon Dawson / No10 Downing Street)

Dr Biden wore a black and white polka-dot dress with a black blazer bearing the word "LOVE" on the back in studs. It was said to be by French brand Zadig and Voltaire.

Mrs Johnson and her counterpart had hoped to take tea at St Michael's Mount – the rocky, tidal, National Trust island off Penzance.

But Cornish “mizzle” scuppered the plan and they had tea at the hotel instead.

Dr Biden said: "It's really nice to be here in Cornwall. It's my first time.

"Obviously it's beautiful for those of you who have been here before."

Previous : Inside Cornwall ahead of G7 summit as locals slam ‘disgrace’ while others ‘proud’
Next : Boris Johnson hails Biden as ‘breath of fresh air’ and downplays Northern Ireland tensions