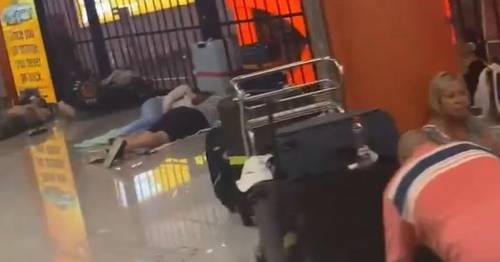 Two Brits have been left stranded in Palma after Jet2 cancelled their flight to Manchester – leaving one girl "crying until she was sick".

Nyomi Loftus and Megan Sainsbury forked out €65 (£55) for a taxi to take them back to their hotel after an apparent baggage mix-up which led to the airline "missing their slot to fly".

The pair were set to depart from Palma Airport in Spain last night and waited over four hours to eventually be given an update at 3.50am, reports Manchester Evening News.

Nyomi, from Sale, said: “The worst part was that they called out the names of 30/40 passengers and told them to go to a special spot so we could go to an adult-only hotel.

"We had to pay for the hotel; families with babies were lying on the floor. The hotel ended up being a family hotel anyway – they could have gone.

"We were told there was a mix-up with the baggage and they had miscounted.

"They had to unload it off one plane before moving it and then they lost the slot to fly as the staff needed a rest. No one could get any detail from anyone."

The 36-year-old said 70 bottles of water were shared between 380 travellers before hotel plans were made.

She added: "There was a little girl sat near us in the airport who was being sick because she was crying so much.

The pair hope to fly back home at 11.35pm tonight, but are concerned the flight will be cancelled again (file photo of Palma Airport)
(

"People were just walking around trying to find out what was going on. It was left it absolute uproar – it was a bit of a disaster.

“We are currently sat on a coach heading back to the airport but we still don’t know what time the flight is or if there is even a flight confirmed.

"The first food and drink was provided at the hotel at 7.30am – eight hours after our flight was due to depart and 11 hours after we arrived at the airport."

The pair hope to fly back home at 11.35pm tonight, but are concerned the flight will be cancelled again.

They waited over four hours to eventually be given an update at 3.50am (file photo)
(

Nyomi said she is due to start a new job tomorrow and will have to join the next intake if she misses her first shift, meaning she will have "no job for four to five weeks".

A spokesman for Jet2 said: “We would like to apologise once again to customers affected by this delay.

"Our teams have worked tirelessly to look after everyone, however unfortunately there was a shortage of accommodation in Majorca yesterday evening.

"We advised customers immediately via text that we would reimburse anyone that needed to book hotels separately and we have done everything we can to look after everyone. All remaining customers are being flown home this evening.”

Previous : ‘Glimmer of hope’ for comatose boy’s mum as she begs judges not to turn off life support
Next : Boy, 17, stabbed to death yards from Tottenham Hotspur stadium as locals plan protest