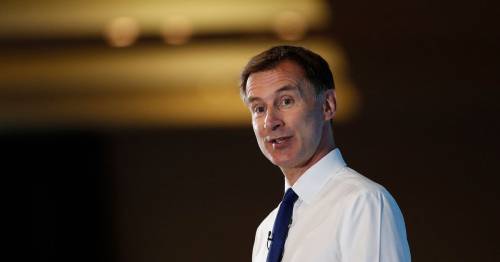 Former Health Secretary Jeremy Hunt has revealed that he had cancer and has since recovered.

The Tory leadership hopeful opened up about his battle with the disease, which he said had also affected members of his family.

Mr Hunt, who chairs the Health and Social Care Select Committee, said: "Every member of my family has had cancer.

"I have had a minor one myself which has fortunately been resolved.

"So it’s touched my family very dramatically and I know it has touched many many families.

"My work on the Select Committee has shown me there are a lot of things we can do to improve our cancer survival rates.”

It comes after a damning report concluded that ministers are not meeting their commitments to improve cancer care in England.

Experts advising MPs on the Health and Social Care Committee examined the pledges the Government had made to improve cancer outcomes for patients.

They found that staffing issues were underpinning a lack of progress towards the goals of faster diagnosis, more personalised care for patients and treatment ambitions.

“Cancer care is in crisis," he said. “I know from my own treatment how important an early diagnosis is when it comes to cancer.

“The Conservatives say they are declaring a ‘war on cancer’, but they’ve spent the last 12 years disarming the NHS.”

NHS figures obtained show there are 1.2 million patients on waiting lists for cancer diagnostic scans and tests, up 135,000 on last July.

NHS England is committed to rolling out a network of up to 160 diagnostic centres across the country.

Mr Hunt will be taking part in a 5km race to raise money for Cancer Research UK in the charity’s Race for Life this summer alongside fellow Tory Angela Richardson.

The South West Surrey MP will be among thousands running in Stoke Park, Guildford, on July 24.

Previous : ‘The Tories have gone on strike – head to the bar, comrades!’ – Fleet Street Fox
Next : Wes Streeting says crunch by-election will show Labour’s path back to power