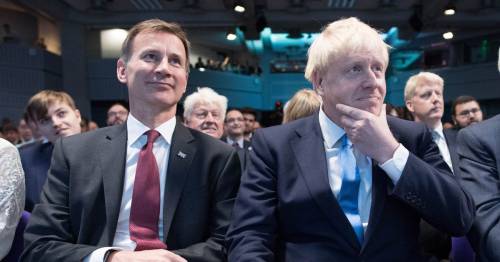 Boris Johnson’s one-time leadership rival has fuelled claims he is preparing a bid to topple the Prime Minister.

Former Foreign Secretary Jeremy Hunt was trounced in the 2019 tussle for the party crown.

But he confirmed he could launch a fresh tilt for the top job as the PM reels from Downing Street Partygate fines and a hammering in last week’s local elections.

While insisting the war in Ukraine meant it was not the "right time" for a leadership change, Mr Hunt told Times Radio: "But I would be very open with you that I don't rule out a return in the future.”

The ex-Cabinet Minister, who returned to the back benches after refusing to accept a demotion when Mr Johnson became PM in July 2019, admitted "setbacks" the Tories suffered in the local elections were not just "midterm blues" but reflected the cost-of-living crisis.

"Underneath it, I think the reason that we got such a kicking was economic concerns that many families had," he said.

"To win an election, the Conservative Party has to promise a well-funded NHS and the prospect of tax cuts.

"If we make people choose between one or the other, we're not going to win the election."

He added: "I do think that we would be wrong to say that the setbacks the Conservative Party have are just mid-term blues, and there’s a big mountain to climb to win the next election."

Mr Hunt said some aspects of his premiership would have been "better" than Mr Johnson if he had won the 2019 leadership contest – but he wouldn't have won the massive majority.

He said: "I’d have done some things better than Boris Johnson and I’d have made some mistakes that he didn’t make.

"I think my approach to the pandemic would have been different but on the other hand I wouldn’t have gotten the majority that he got in the 2019 general election."

The PM has resisted calls to quit over the Partygate scandal, which has already resulted in fines from him, his wife Carrie and Chancellor Rishi Sunak.

There are fears in Downing Street that Mr Johnson could receive further penalties as he is believed to have attended six of the 12 gatherings under investigation by the Metropolitan Police.

Tory MPs were mutinous at the height of the scandal in February but few are now openly calling for Mr Johnson to go – partly due to the lack of an obvious successor.

Rishi Sunak's leadership hopes were torpedoed by a damaging row over his wife's tax affairs and the cost of living crisis. He has also received a Partygate fine.

Foreign Secretary Liz Truss is seen as another frontrunner but her popularity among Tory activists has been eclipsed by Defence Secretary Ben Wallace.

Most top Tories are keeping their cards close to their chests. Only Foreign Affairs Committee chairman Tom Tugendhat has openly said he would run to be the next Conservative leader.

Previous : UK sanctions Putin’s ex-gymnast ‘lover’ in strike on Russian President’s ‘shady cabal’
Next : Brave mum has brought her little boy back to life THREE times after his premature birth