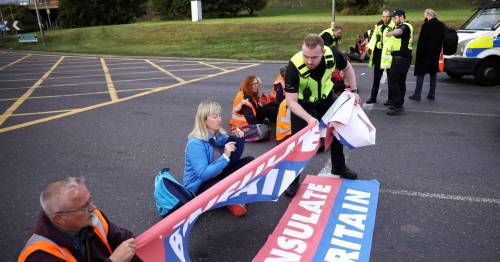 Climate change activists who have caused major disruption to the UK's busiest motorway over the past month are suspending their campaign in the run-up to COP26.

Insulate Britain campaigners have blocked the M25 on at least 13 days in the past five weeks as they call for the government to introduce heat-saving measures in social housing.

The group, an offshoot of Extinction Rebellion, has since its first protest on September 13 been taking to the roads of the motorway encircling London to block cars as they protested against carbon emissions.

That despite a High Court injunction last month blocking it from doing so.

But the activists have now announced plans to suspend their campaign till October 25.

Have you been caught in the chaos of their campaign? Get in touch at webnews@mirror.co.uk

Insulate Britain will suspend their campaign until October 25
(

"Insulate Britain would like to take this opportunity to profoundly acknowledge the disruption caused over the past five weeks," the environmental group said in an open letter penned to Prime Minister Boris Johnson," the group said in a letter destined to the Tory leader.

"Ahead of COP26, Insulate Britain will suspend its campaign of civil resistance until Monday 25th October."

Insulate Britain's announcement comes a day after its protesters clashed with angry motorists in Essex.

A mother berated protesters for stopping her from driving her 11-year-old son to school.

Lorry drivers blasted their horns and a female protester was nearly run over by a frustrated motorist as the environmental campaign group blocked roads for a 13th time.

Multiple confrontations occurred at around 8.30am, with demonstrators dragged off the roads by drivers near a busy industrial estate in Thurrock.

The group has blocked parts of major roads around London in the past month, including the M25 and M4, to draw attention to climate change.

But the general public doesn't seem to agree with their actions, with a YouGov poll asking the question 'Do you have a favourable or unfavourable view of Insulate Britain?' was asked and only 3% answered 'very favourable'.

13% gave an answer of 'somewhat favourable' and 17% said Insulate Britain are 'somewhat unfavourable'.

36% of the people who answered the survey believe the group to be 'very unfavourable'.

Owing to past neglect, in the face of the plainest of warnings, we have entered upon a period of danger. The era of procrastination, of half measures, of soothing baffling expedients, of delays is coming to its close.

"In its place we are entering a period of consequence.” (Winston Churchill 1936)

"Insulate Britain would like to take this opportunity to profoundly acknowledge the disruption caused over the
past five weeks.

"We cannot imagine undertaking such acts in normal circumstances. But the dire reality of our situation has to be faced.

"The facts are laid out by Sir David King, the former chief scientific advisor to the UK government, he said “We have to move quickly.

"What we do, I believe, in the next 3 to 4 years will determine the future of humanity”.

"The collapse of the climate is happening around us. We face economic chaos and the breakdown of law and order in a matter of years. We will lose our incomes, pensions, and savings while passing on an appalling legacy to our children.

"They will be rightly furious. Around the world thousands of millions of people will lose their lives through slaughter and starvation as crops fail and society collapses.

"Ahead of COP26, Insulate Britain will suspend its campaign of civil resistance until Monday 25th October.

"In light of the speech you made (to the UN on the 22nd September) in which you recognised that “We are approaching that critical turning point – in less than two months – when we must show that we are capable of learning, and maturing, and finally taking responsibility for the destruction we are inflicting, not just upon our planet but ourselves”, we ask you to use this time to signal that you believe what you say.

"We invite you to make a meaningful statement that we can trust, a statement that the country wants to hear: that your government will live up to its responsibilities to protect us, to defend law and order; that your government will take the lead needed to insulate and retrofit our homes; that it will ‘get on with the job’ so families can feed their children and keep their homes warm.

"We invite you to do the right thing, so we can be secure in the knowledge that our government did everything it could to protect and defend our country."

Insulate Britain began in August and are separate from the like of Extinction Rebellion in that their goals are far more specific.

Their primary aim is to force the government to look at insulating Britain's 'leaky' homes.

Much of Britain's energy emissions are caused by homes that are not energy efficient. According to the National Housing Federation, England’s homes produce more carbon emissions every year than is produced by all of the country’s cars.

They said: "Nearly 15% of the UK’s total emissions comes from heating homes: an overhaul of the energy performance of the UK’s housing stock is needed to reduce the energy demand.

"In order to meet UK commitments under the Paris Agreement to stay below 1.5C, and legal obligations under the Climate Change Act 2008, as amended in 2019, emissions from heating and powering homes must be reduced by 78% in less than 15 years and then to zero by 2050."

Their target is expensive and the Climate Change Committee believes that retrofitting the estimated 26 million homes would cost around £26,000 each. This is an overall price tag of £676 billion.

Previous : Covid lateral flow tests ‘more accurate than thought’ and positives ‘should be trusted’
Next : Mauricio Pochettino thought “is this a joke?” when he received Lionel Messi phone call