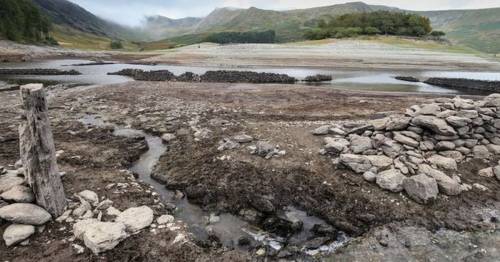 The remnants of a lost village lying deep underwater in a beautiful Lake District valley could emerge again this summer as temperatures soar.

Mardale Green, a close-knit farming community in the shadow of Cumbria’s mountains, was evacuated to make way for the Haweswater reservoir back in 1935.

Its 12 or more cottages and houses, its ancient church and its well-loved inn were demolished and the land flooded.

Almost 90 years later, when water levels drop below 50 per cent, fascinating and ghostly outlines of the village’s 17th century humpback bridge, streets and walls, as well as the foundations of its former buildings, have started reappearing.

A rusty old gate, granite wall and posts that belonged to the sunken farming community of Mardale Green
(


The last time was in September 2021, caused partly by people using more water because they were working from home and staycationing during the pandemic.

The weather – prolonged heatwaves and droughts – were responsible for previous occasions in 2018 and 2014.

Reservoir owners United Utilities say water levels are good and healthy at the moment and whether the village becomes visible “will be down to the weather”.

The Met Office has predicted “warmer-than-average” summer conditions over the next few months so there’s every chance it could make an appearance.

In the late 1920s Manchester and the North West were running short of reliable water sources and the Haweswater lake was earmarked to become a massive reservoir to supply the area.

There was a huge public outcry but the plans were approved and the people of Mardale Green had to say goodbye to the hamlet they loved.

The Dun Bull Inn, apparently famous for its hot buttered rum, was a great loss to the wider community too.

It was popular for miles around with farming families and hunting folk who gathered there for fairs, feasts, dances and sales throughout the year.

When the tiny Mardale Church, with seating for 50 or less, held its last service in August 1935, hundreds turned out and had to stand outside while the Bishop of Carlisle gave the final sermon.

The graves in the churchyard were exhumed and the village’s dead reburied elsewhere.

Many of the buildings were blown up in an Army demolition exercise by the Royal Engineers, although that wasn’t deemed appropriate for the church which had a more respectful ending.

The skeleton of the old village remains to this day, mostly hidden beneath a glorious lakeland landscape that’s a haven for wildlife and a popular route for walkers.

The reservoir – the highest lake in the country – usually has a depth between 68ft and 101ft and supplied 25 per cent of the homes in the North West.

When the ruins emerged last September, owners United Utilities said the ­reservoir volume was at 40% rather than the 70% that is expected in September.

Previous : Pregnant woman in £15,000 payout after boss says she ‘must have been having fun lately’
Next : Charles Leclerc admits Red Bull “have upper hand” despite leading F1 title chase