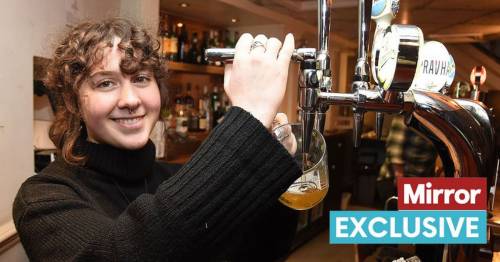 Inside the only place in Britain where villagers own pub, library and shop

Business is booming at a village pub saved with the Mirror’s help, with 1,000 pints being sold in the first week of opening.

Earlier this year we told how local residents feared their only pub, The Trawden Arms, would be sold and converted into flats.

They clubbed together to raise cash to buy it but were tens of thousands short of their £520,000 target.

After we featured their plight as part of our Save Our Pubs campaign, more cash flooded in – and now the 126-year-old boozer has reopened and is owned and run by the villagers.

The pub’s landlord Adam Young serves a pint for Steven Wilcock, chair of trustees for library, shop and community centre
(

Trawden in Lancashire is the only place in Britain where local residents own the library, post office, shop, community centre and pub – all bought over the past seven years.

New pub tenants Adam Young and Jo Stafford say they have been overwhelmed by the support of their regulars.

Jo, 35, said: “It has been amazing. We have sold out of beer about four times. We ran out of food one day.”

Jack Holland, 29, moved to Trawden last year and was devastated when he heard the pub was closing so he joined the committee tasked with saving it.

He said: “When I heard it was up for sale for half a million I thought we had no chance.

All profits will be ploughed back into the pub over the next three years but it is hoped investors will get their money back as the business grows.

Dave Webber, 53, chair of the pub management committee, said; “The exposure we got from the Mirror probably added £40-£50,000 to our efforts.

The Trawden Arms had been earmarked for flats
(

"It was a very timely piece for us.

“The first couple of weeks have been enormously successful. The tenants are linking up with the community centre across the road to work on joint projects. It’s exactly what we wanted.”

Steve Wilcock, 68, chair of the trustees of the community centre, said: “It is helping to bring back the community spirit. We are really grateful to the Mirror.

Steve Wilcock is chair of the trustees of the community centre
(

The community library and shop
(

"The publicity gave us that final push.”

Molly Ralphson, 47, who volunteers at the library and shop, is also on the pub committee. She said: “It has been great since it opened. Tthere is a lovely atmosphere.”

Alongside the pub’s roaring log fire, residents are toasting their success.

Rob Armstrong, 60, said: “Its fantastic. The staff are perfect and Jo and Adam are marvellous.”

Local Rob Armstrong raised a glass to the 'fantastic' achievement
(

Janet Heap, 74, said: “The village is so full of community spirit, it’s unbelievable.”

Abigail Fraser, 18, who works behind the bar, said: “When there was a plan to turn it into flats, everyone was devastated. It is such a powerful part of the village.”

Previous : Cheapest house in city on sale for just £50,000 – but it may need totally rebuilding
Next : Mom fatally shot at memorial for son killed days earlier in Chicago