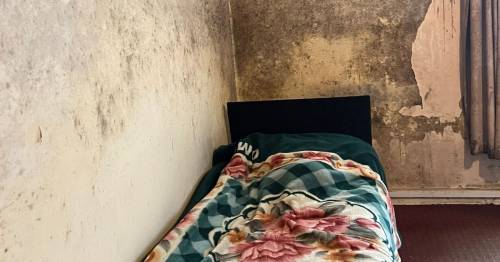 A glimpse inside a council-owned flat occupied by a disabled mum and her NHS worker daughter shows the grim conditions that have led to it being dubbed the “mouldiest in England” – and they are finally being moved.

The plight of this flat's residents, a 75-year-old mum, disabled by a stroke, and her daughter, 44, an NHS health care assistant at a city hospital, have been made public since images of their home have been shared online.

Birmingham City Council has finally allowed the family to move.

The daughter, who we are not naming, showed Mr Tweneboa and a community organiser around what was clearly an uninhabitable flat.

Her bed was against a wall rank with black spots, merging into a despairing sweep of mould that hung over where her pillow is situated.

This is where she crawls for some respite after a 12-hour day shift on the NHS frontline, supporting patients at a hospital in the city.

She doubles up her work with being sole carer for her mum, who sleeps in a double bedroom down the corridor. It’s the least mouldy of all the rooms, but it’s still no place for an ill person to be living.

The video has exposed the horrific state of some city accommodation
(

Together they pay council rent of just shy of £400-a-month. The daughter’s relatively meagre income as a health care assistant is supplemented by her mum’s disability attendance allowance.

Originally from India, the mum travelled to Birmingham in the 1960s for work with her husband, raising a family here. She can get around a little now with the help of a cane, but is weakened by the stroke and mostly bedridden.

She is visually impaired and her hearing is poor.

During the tour of the flat, she expresses her sadness over her home deteriorating to such a state that she believed it was impacting on her health.

She gets no home help, so in the daytime when her daughter is at work she is alone – her daughter too ashamed to ask for extra help for her mum, and plagued at work by fears of coming back to find her on the floor or having come to harm.

Mould covers every surface of the flat
(

The bathroom and kitchen were both in a dire state, while what should have been the dining room had become a storage area, full of furniture gone mouldy by being placed close to the walls.

Mould covers every wall, every door. Kitchen tops and sink, the bath, loo and sink are scrubbed but everywhere else is blackened with mould.

The daughter, who now suffers from asthma, said she had never invited a friend back to her home.

“I won’t let anyone in, I tend not to answer the door, I am too ashamed and embarrassed at the conditions we live in,” she said.

None of her work colleagues know of her pain. Even her friends have never been here. She says she has always made excuses to avoid anyone coming to her home.

She has read comments posted on previous stories and social media coverage about the family’s plight – cruel comments from people who know nothing of their situation really, people who think nothing of passing disparaging comments and who say they just need to clean more, do some decorating, take responsibility.

“If I could manage it, do people not think I would? We don’t want to live like this,” she says, tears squeezing out.

Six years ago when the council carried out a temporary fix, cleaning off mould and repainting, they treated the walls with chemicals, one room at a time, while the pair remained living there. But within months, the mould was back, worse than ever.

“I realised it was hopeless. I gave up really, and we just hid away.” She next reached out for help in 2020, just before the pandemic. An inspection visit was booked in, said the daughter, but then cancelled when lockdown occurred. Again in 2021, she reached out for help.

A report was done by a housing official that ruled the flat was not inherently damp and the mould was growing due to condensation inside, she said.

When an inspector visited in December he was, claim the family, abrupt and cold, telling them the place was not in poor enough condition to warrant a move – it just needed repairs.

The younger woman was sleeping on this bed, surrounded by mouldy walls
(

The flat would have the mould treated and walls repainted. The daughter also claims she was warned that if the work was done, and the mould returned again, the council would not again foot the bill.

“I cried for two weeks after that. I was left feeling it was entirely my fault, my failure, and I knew I was doing my best.” As a result, she says, she was left feeling her landlord, the council, was 'not on her side', and has led to a breakdown of trust ever since.

The council has now relented and approved a housing offer.

A People’s Manifesto for Fair Housing in Birmingham was created last year, its campaigners led by current and former tenants living in temporary accommodation, private flats and houses, social housing and traveller accommodation across the city.

One of the campaigners Mus, who was on the tour of the flat, said the group had pledged to now support the daughter and her mother through the next stage of the rehousing process, while providing additional support and solidarity from others in poorly maintained social housing.

Kitchen tops and sink, the bath, loo and sink are scrubbed but everywhere else is blackened with mould
(

"We want people in Birmingham to know they don't have to suffer alone in bad housing. There are so many others in the same situation and our campaign is here to support you and help to fight so that nobody has to live in such awful conditions as this family," said a campaign spokesperson.

The council said this week: "Following due process the family have successfully bid for a property and we have been able to offer them new accommodation, which they have accepted. We apologise for the distress caused in this case, and wish the family well in their new accommodation."

When asked about the case last week, before the move was approved, Birmingham City Council said: "We are very sorry for the poor living conditions caused by the mould in this property.

The Birmingham flat is covered in mould, where a disabled woman and her daughter, an NHS worker, live
(

"Birmingham City Council has been in regular contact with the tenant about the issues over the past six months and has offered alternative temporary accommodation on numerous occasions.

"However, they refused to allow access on each occasion so work could not commence. We remain fully committed to treating all the mould in the property and will begin work as soon as the tenant is satisfied and allows us access.

"In the meantime we have given them advice about how they can limit the mould in the property and are in active discussions about rehousing them to a more suitable property in line with our allocation policy."

Previous : Ashley Cole breaks down in tears as he recalls gang threatening to “cut his fingers off”
Next : Rare sex-starved bat needs a mate as he’s the only one of his kind in UK