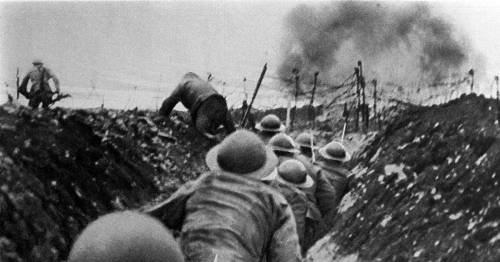 By capturing the horrors of the First World War trenches in brutal yet compelling verse, Siegfried Sassoon told the stories that many at the time were not ready to hear.

But while his words remain as vital as when they were written a century ago, his own story is less well told.

Now the life of the soldier poet is being brought to the big screen in a new biopic, Benediction. Written and directed by Terence Davies – best known for autobiographical film Distant Voices, Still Lives – the movie is out on Friday.

Sassoon was a decorated war hero who went on to write scathingly about the conflict – landing him in a psychiatric hospital with alleged “shell shock”.

Siegfried Sassoon was reputed to carry out almost suicidally brave acts, but rejected the idea of war as glorious
(

He also endured heartbreak from a string of gay romances and a short-lived marriage to a woman 19 years his junior.

Born in 1886 to a wealthy family, he left Cambridge University before getting his degree, aiming to live off his writing.

It took until he was 27 to find success, publishing The Daffodil Murderer in 1913. The following year, the assassination of Archduke Franz Ferdinand in Sarajevo plunged Europe into crisis.

He joined the Sussex Yeomanry but broke his arm, only reaching the trenches in 1915 with the Royal Welch Fusiliers.

There he became known as “Mad Jack” for his near-suicidal acts of bravery, including the single-handed capture of a German trench and rescuing wounded comrades under fire.

Sassoon was open in his criticism of the First World War
(

His courage earned him the Military Cross – but he found the supposed glory of battle eclipsed by the bloodshed and terror that he immortalised in verse.

His graphic accounts shocked readers, but he was determined his poems should convey the realities of war.

In Counter-Attack, he describes a soldier being fatally wounded – and the futility of his death: “He choked, And fought the flapping veils of smothering gloom, Lost in a blurred confusion of yells and groans… Down, and down, and down, he sank and drowned, Bleeding to death. The counter-attack had failed.”

His poems nevertheless proved popular and won critical acclaim. Dr Marcello Giovanelli, whose book The Language of Siegfried Sassoon is set for publication later this year, said: “Within the first three or four months of being at the Front, there was a shift in the kind of poetry he wrote.

“We move from writing about forests and flowers to life in the trenches – and a focus on the individuals. The style becomes much more direct, less flowery.

“He becomes known as a poet of directness and everyday language, using the vocabulary and vernacular of soldiers at the Front.”

But Sassoon’s ordeal sealed his disillusionment with the war and the way in which it was being fought.

He was particularly scarred by the loss of his friend, David Cuthbert Thomas, and in the summer of 1917 wrote an infamous open letter, which he declared was a “wilful defiance of military authority”.

He wrote: “I believe that the war is being deliberately prolonged by those who have the power to end it.” At a time of fervent patriotism, many saw his words as treasonous.

But his past bravery, and an intervention from poet Robert Graves, saved him from a court-martial.

Instead, he was sent to Edinburgh’s Craiglockhart Military Hospital.

Anthony Richards, Head of Documents at the Imperial War Museum, explained: “He was sent there, theoretically, because he’d got shell shock.

“But one of the main reasons was that he was against the way the war was being fought. They sent him up there to hide him, almost.”

In the hospital, Sassoon met Wilfred Owen – another poet whose work portrayed the war’s barbarity. Owen was so in awe of Sassoon that he told him in a letter that he thought of him as “Keats and Christ and Elijah”.

Returning to the Front, Sassoon was wounded by friendly fire in July 1918, while Owen was killed on November 4 – a week before the Armistice.

Mr Richards added: “Sassoon was very influential with Owen, and played a huge part in getting Owen published.

“But through his own poetry there are some key examples of how people think of the First World War.

“The classic one is in his poem The General – this whole ‘lions led by donkeys’ idea of the brave soldiers in the trenches and the idiot generals who don’t know what they’re doing.

“In recent years people have reassessed that, but that view was incredibly popular in the 60s, 70s and 80s.”

As his war poetry fell out of fashion, Sassoon switched to prose – including a trilogy of novels telling of his own experiences through the “memoirs” of the fictional George Sherston.

It was only after the war that he had his first gay relationship, with artist Gabriel Atkin. He went on to have other romances, including with actor Ivor Novello. Then in 1927 Sassoon finally found love with aristocrat Stephen Tennant. But after six years, Tennant broke off the affair, by letter.

Actor Capaldi has told how he questioned whether he should take the role – because he is not gay himself.

He said: “A gay person would have insights into that world that I don’t. The truth is I wasn’t gracious enough to step aside… because I wanted to work with my idol, Terence Davies.”

Sassoon was still getting over the breakup with Tennant when he met Hester Gatty, a judge’s daughter. They wed the same year despite him being 19 years her senior. They had a son, George, but parted in 1945.

Co-star Lowden said Sassoon was a “trailblazer” in questioning the human impact of war – making the film extra relevant now.

He said: “I would have said, go see this film to get to know this incredibly brilliant man. But it makes so much sense at this moment because it’s about standing against the lack of respect for human life.”

After his marriage failed, Sassoon became almost a recluse. He died of stomach cancer in September 1967, a week before his 81st birthday.

Biographer Lord Max Egremont feels the poet’s life was marked by sadness. He said: “There is a tragic element, but he was capable of huge joy as well.

"He didn’t really want to be a homosexual. And before 1914, he never really found his true voice as a poet. But the reality of the trenches, the compassion for his men, that was when things started to change.”

And his work still stands as a testament to those lost in battle. Lord Egremont said: “Soldiers who were in Afghanistan said the poems of Siegfried Sassoon were still a very realistic account of what combat on the front line is like.”

As the poet wrote himself, in Aftermath: “Have you forgotten yet? Look down, and swear by the slain of the War that you’ll never forget…"

Previous : Can Abortion Be Funny?
Next : Woman transforms humdrum backyard into dream garden on a £2,000 budget