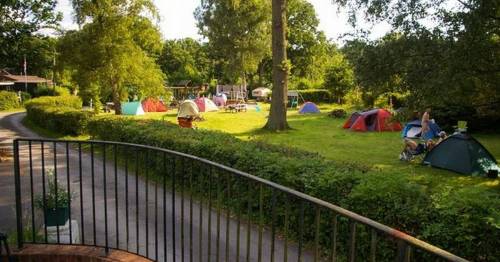 A famous hidden nudist resort still has the ability to shock when a man answers the door in the nude.

Tom Dyrer-Beers and his wife, Victoria are comfortable in their skin and especially when they visit well-know resort and residential community.

The hidden gated community of Spielplatz, Hertfordshire is a place where being starkers for no reason at all is normal.

Around 50 people who live there like allowing the wind to blow freely and all admit they are happier without clothes.

Isabella McRae of HertsLive reveals how she visited in a knitted dress and huge fluffy coat and felt like an outsider intruding on their world, not the other way around, although they never made her feel that way…

Tom welcomes me into their home, which looks like a small cabin on the outside but feels spacious and homely when I make my way through to their living room.

There are bookshelves and artwork stretching up to the ceiling, some of which Victoria, who is wearing a shawl and seems slightly shyer than her husband, had created herself.

"If we wore badges saying we were naturists or nudists on our shoulders," Tom, who is a member of the Board of Directors at Spielplatz, says, "we’d have to answer silly questions and be the brunt of intolerance a lot.

"So we tend to stay rather quiet. But among other naturists, it’s fantastic, because we just relate to each other without any problems."

Tom, who is from Pennsylvania, first found an interest in naturism when he started modelling for life drawing classes.

He felt some trepidation the first time, as was expected because it was unfamiliar. But almost immediately, posing in the nude felt natural. He started talking to the artists afterwards and realised that this was a world he wanted to explore.

Tom continued modelling, and Victoria attended one of those life drawing classes. An artist, Victoria has been drawing bodies since she was 16 and she is very comfortable with the human form. Yet she wasn’t so confident with her own body, and it was Tom who slowly piqued her interest in naturism.

"Tom is so passionate about it," Victoria says. "I think it took me a bit longer because society doesn’t see it as a normal thing.

As a woman, society makes you so body aware. When you become a naturist, you realise that’s all irrelevant. It’s amazing."

Tom Dyrer-Beers is passionate about naturism
(

"You realise that bodies go through different stages. This idea of the ‘body beautiful’ is ridiculous.

"It makes a mockery of it. I just wish that other people could see that. Lots of people don’t have the right idea about places like this. I just don’t understand it.

"When you see people with no clothes on, it's like: 'Oh, that's that.' You have to concentrate on who they are as a person, and that is what becomes the most important thing.

"There's no clothes to say where you are in society, or what group you belong to. It's just you as a person."

Victoria doing the gardening in the nude
(

Tom adds: "The problem is, people do not see enough naked bodies, de-sexualised naked bodies, particularly as children and teenagers.

"If that were to become more normal, then so many of the concerns would melt away.

"But it’s a long haul for that to become more normal because you’re overcoming decades’ worth of unnecessary concern.

"If you get used to seeing people as they are, it’s a whole different story."

Iseult Kelly, the daughter of Charles and Dorothy Macaskie, the founders of Spielplatz
(

Tom had read about Spielplatz, which was founded in 1929 by Charles and Dorothy Macaskie and is the UK’s longest running naturist resort.

It is also the only residential naturist community in the country, where nudists live together, although there are plenty more in Europe.

In 1957 the documentary series Out of Step on ITV, the investigative reporter Dan Farson visited Spielplatz and interviewed Charles and Dorothy and their daughter Iseult.

It is believed the programme was the first showing of a naked woman on British television.

Around 50 people have made a home for themselves at Spielplatz
(

"When Victoria and I met," Tom explains, "I said: 'Let's go and experience this.' So we came in a very wet and rainy February, and visited and stayed in one of the cabins just up the way.

"And though there wasn't much niceness about the weather, there were some very nice people.

"We thought, well, maybe we'll take the advice and we need to come back when it's warmer.

"And we did that. And we noticed at the time that this property was starting to be built. And I said to Victoria: 'We might really want to consider this."

Asked about how their families and friends have reacted to their move to Spielplatz, Victoria says: "They think it's a beautiful place, but they wouldn't want to be naturists.

Spielplatz has a beautiful swimming pool
(

They think it's perfect for me. But they wouldn't want to be naturists and that's absolutely fine."

Spielplatz is the German word for 'playground', and it was established by naturists as a place of retreat. Even now, when the site is closed to visitors for the cold winter months, there are signs of its bustling life.

There is a clubhouse, which is the hub for social gatherings, a children’s playground, hot tubs and a swimming pool, a basketball court and camping grounds.

"As a community," Tom says, "there is a real spirit of wanting to be here, getting together, just enjoying social nudity.

"It’s a real cult of sunshine when it's out, which is lovely. And of course, that's physically really good for you as well."

The gated community feels off the beaten track, but it is just minutes from the M25 and not far from either St Albans or Watford

But Tom and Victoria say that few people seem to have heard about Spielplatz in the local area, in spite of it being so famous in the naturist community.

"I would say that, as far as we are aware, anyone who knows about it is curious or accepting," Tom says.

"There are a surprising number of residents in Bricket Wood who have no idea that it is here. But that is about to change."

British Naturists, a members organisation for naturists, has taken over the property next to Spielplatz.

The site has been a members’ club for as long as Spielplatz has existed, but its activity was in decline.

It is being redeveloped in the hope that it will become a hub for naturists in the London area.

"It used to be that parliamentarians from the 30s, 40s and 50s came up here regularly as a way to escape the press and just relax and enjoy themselves.

"George Bernard Shaw was a visitor and wrote about his experiences here. All kinds of things have taken place that have been slowly lost over the decades.

"Back in the 50s, there would be several hundreds of people here camping and experiencing [naturism] on a warm summer day."