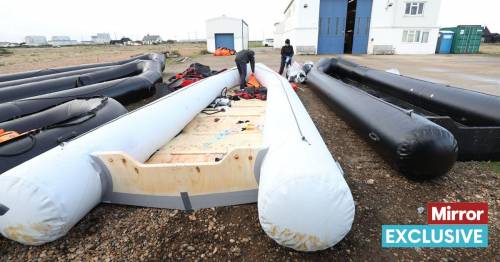 Four flimsy DIY rafts were found at Dungeness beach in Kent today – hours after 27 people perished trying to cross the Channel in a similar, flimsy craft, which capsized Wednesday night..

But asylum seekers are still willing to risk their lives, another 50 or so crossing today. Natalie Golden, of refugee charity Care 4 Calais, said: “These rafts don’t look fit for use on a boating lake."

The boats had been cobbled together from heavy duty PVC, marine gaffer tape and thin sheets of plywood screwed together.

Three black and one in white – the boats looks remarkably similar to the doomed RIB which saw three children, seven women, including an expectant mother and 17 men die in freezing conditions off the coast of Calais.

Peter Faulding, owner of Specialist Group International, which carries out maritime security operations and supports police dive teams across the UK, said: “These boats are amateur. It looks like they have been gaffer-taped together and the plywood isn’t even treated.

“There’s not a chance I would go out to sea in one of those and if I put my team on board one I would expect to be charged and brought to court.

“I don’t believe these boats are being transported long distances so they are probably being built within 20 miles of the French coast in a deserted warehouse or an old farm.

Boats at Dungeness beach – many mass produced and DIY constructed
(

“Someone in the gang must have the knowledge to knock them together although the valves look very basic.

“Normally boat tubes are made of a material called hypalon so they will also need to have a supplier. It looks like they have templates to create the tubes and I’d expect a team of at least five people is working on them.

“The French police need to find this outfit quickly, because if they keep making these boats lots more people are going to die in the channel.”

Discarded items could be seen inside the boats, including cold weather clothing, kids shoes and Nautamine travel sickness tablets.

Each RIB also had at least one cheap bike pump – in case of deflation – and cut off plastic bottles for bailing out water.

There is currently a shortage of boats across Northern France as a result of channel seizures and sales bans by companies including Decathlon.

This is the first evidence to suggest criminal gangs are now constructing their own boats at a secret factory.

The boats appear to have been made from identical patterns and are around 8m long.

Migrants launching an inflatable boat and setting off for the UK
(

The ‘sponsons’ (side pontoons) are made from a single piece of heavy PVC, closed off with a circular piece at the rear.

Five separate sections of PVC have then been attached with strips of marine duck tape to form the front of the boat.

The base is another single layer of PVC topped with eight sheets of plywood, which have been secured by screwed on battens.

At the rear a thicker piece of plywood in between the sponsons provides an attachment point for an outboard motor.

The remains of the dinghy that sank
(

The workmanship is clearly poor and many of the stitched on handles and safety rope attachment points had failed in the course of the crossing.

The boats were stored at Dungeness Lifeboat Station overnight on Wednesday before being collected by a lorry and trailers today.

Another four boats – made by named manufacturers – had been pulled up at the same location.

The design of the DIY versions has clearly been based heavily on these Ukrainian vessels but they lack the raised front needed to keep the nose of the RIB above the waves.

The Kolibri boats also bear a safety warning advising a maximum load of 6 people or 800kg.

However, human trafficking gangs have been known to cram 20-30 people into their DIY versions.

Around 50 migrants are believed to have successfully crossed the Channel today on board two boats brought into Dover Marina, Kent before 5am in pitch black darkness.

The body of an asylum seeker who drowned in Wednesday’s disaster was found washed up on a beach at Sangatte, near Calais.

The discovery raised the death toll in the worst-ever Channel crossing accident. Only two survived, one Iraqi and one Somalian.

It was confirmed that some of the victims were Kurds from northern Iraq.

It is believed the boat left Loon-Plage, near Dunkirk, on Wednesday morning and sank after possibly colliding with the ship at the limit of French territorial waters.

Children are being put at risk
(

Such an accident has long been feared in the Channel, the busiest shipping lane in the world.

A mayday call made during Wednesday’s Channel tragedy requesting urgent assistance from “all ships” in the area was released today.

Charles Devos, regional manager of life boat association (SNSM) in Calais, was one among the first people at the scene.

He said he dragged six bodies from the sea, including a pregnant woman, and seeing those drowned was “traumatic”.

“I can’t remember such a tragedy. It’s inexplicable,” he said.

“I saw the blow-up boat had really deflated. Was it a valve that came loose or did it hit an object? You never know but I don’t think it was a collision.”

And he said: “I think it happened due to overloading. Don’t forget, you think the sea is calm. The sea isn’t calm because it’s nearly always choppy.”

Mr Devos added: “It’s very, very shocking. It was a bit like the film Titanic when you saw all these people plunged into the water, drowning, with no means of being able to be rescued.

“Unfortunately we were only able to recover the dead people.”

Groups of people setting off to the UK from France
(

Britain’s National Crime Agency (NCA) has offered its support to a French investigation to track down traffickers who arranged the fatal crossing. Five men are currently in custody in France and facing manslaughter charges in connection with the disaster. Prosecutors believe the smugglers operated out of Germany – driving migrants to the French beaches overnight rather than risk being spotted hanging around.

But, giving an emergency statement to MPs, Home Secretary Priti Patel said: “There is also no quick fix. This is about addressing long-term pull factors, smashing the criminal gangs that treat human beings as cargo and tackling supply chains.”

Human rights experts have rallied against the Government’s Nationality and Borders Bill, which contains a number of measures to crack down on asylum attempts, following the crossing deaths.

“This new policy will further exacerbate the asylum system and continue to punish and exclude people seeking safety,” he said.

'Teaming up with French can work'

The tragic drownings of 27 migrants off Calais on Wednesday has prompted fresh calls for action.

One proposal is to set up joint UK/French patrols aimed at saving lives and defeating the human smugglers. But is it feasible?

Operationally, I am confident that it is. I was Director of Ports and Borders in Canada when 9/11 happened. We agreed a new arrangement between Canadian and US Border Agencies which gave officers powers to conduct cross-border operations.

Then, the issue was terrorism but the principle was the same.

These integrated teams worked to enhance security for the benefit of communities on both sides of the border.

A similar agreement could be struck between the UK and France.

The relevant agencies on both sides could establish a joint command structure which would deploy resources both at land and sea to intercept migrants seeking to cross the border illegally.

Joint assets, including surveillance technology, could track and trace the migrants, and joint teams could be deployed instantly to intercept them.

Any that did slip through the net could be returned instantly to France, where they can claim asylum if they so wish.

Politically, it is much harder.

Ever-increasing numbers of migrants are entering the EU. Those refused a permit to stay there simply remain without authority in the borderless Schengen zone.

Those who see an opportunity to get to the UK will take it, notwithstanding the dangers involved. This is fertile territory for the crime gangs.

In order to stop the boats, the French government will have to convince their electorate that it is in their interests to do so.

Time will tell if they really want to work with us on this.

If not, I fear that the smuggling gangs will only continue to profit – and more lives will be lost.

Previous : South Africa and five more countries on UK red list as Covid variant ‘worst we’ve seen’
Next : Doctor caught half-naked with patient telling her having sex with him will cure her – World News