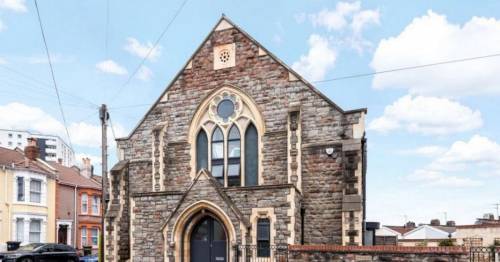 Inside the £475,000 Victorian chapel converted into stunning 3-bedroom home

A Victorian chapel converted into a 'heavenly' three-bedroom home has gone on sale for less than £500,000.

The building, formerly part of a Wesleyan Methodist Chapel in Windmill Hill, Bristol, even has its original stone archway.

Stone mullion windows look out onto a quiet street and a courtyard sits at the back – but the inside of the property has been given a modern makeover.

The three-floor property also has three spacious bedrooms, two bathrooms, a lounge and a massive garage.

The inside has been painted in muted colours with a central staircase featuring iron railings.

Ben Egan, of Keller Williams, the estate agents marketing the property, told the Mirror the building is thought to have been used as a house for boy scouts after it stopped being a chapel.

It then became used for small local parties and events similar to a village hall.

The interior has been fully renovated
(

In its description of the home, Keller Williams say: "A truly unique and wonderful end of terrace, converted Chapel, formerly part of a Wesleyan Methodist Chapel dating back to 1890.

"Converted in 2014, accommodation is now arranged over 3 floors, with 3 double bedrooms and a lovely modern feel throughout.

"Having kept its original stone arch way and window openings, this property really stands out!"

It adds that the property has windows "which are fully double glazed, solar panels to heat the hot water, [and] a pressurized water system."

It's not the first time developers have sought to adapt an old place of prayer for modern usage.

Another 19th century property was given a striking renovation in Consett, County Durham – with its belfry and stained glass windows still intact.

And in May, a converted chapel in Wales went on sale – with the graves still lying in the back garden.

It boasts its own courtyard and original stone archways
(

"Ben states that the property was converted in 2014 but has kept its original stone arch way and window openings.

"The property is in a prime location just a short walk away from the beautiful Victoria Park. All enquiries for this stunning property should be sent directly to ben.egan@kwuk.com."

Previous : Arkansas woman sues trooper for flipping her SUV during stop
Next : Monkeypox patient admitted to hospital in Liverpool as fears grow of infectious disease