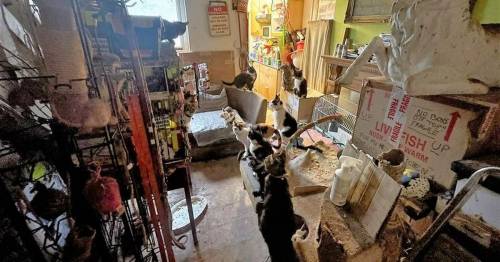 A man who calls himself "Catmando" and lives in a small terrace house with 70 cats looks has become the centre of controversy among neighbours and animal rescue services.

Ian, 56, who uses the surname 'Catmando' and lives with his moggies Gainsborough, claims he trains felines to help people with epilepsy.

However, there is a concern for the felines' welfare and that they cannot roam free because the back garden is covered with chicken wire, barbed wire and metal bars, LincolnshireLive reports.

Images from inside his house show dozens of cats on top of cluttered surfaces. Another picture shows chicken wire and a fence with metal bars covering the top of the back garden.

But Catmando says about 20 cats have already been taken away for treatment for fleas and flu, leaving him with 70 others that he says are "happy".

He is regularly seen walking several of his cats at a time and claims to be a professional cat trainer and a showman.

Catmando said: "I train cats as an alternative treatment for epilepsy.

"Cats recognise when someone has an epileptic fit coming, sometimes three hours in advance of it happening.

"They knead a person and bring them out of it."

Michelle Page, who runs Page's Pet Rescue, told the Mirror she first became aware of the issue around Christmas 2019 and that she had heard stories of the man picking cats up from the street and taking them home.

Melanie Barker, of Gainsborough Feral Rescue, said the problem has got so bad, people now post on Facebook where the man has been seen and those living nearby "take their cats inside in case he takes them".

She said: "The garden is covered in barbed wire and chicken wire and the cats can't get out.

This is LECHO – one of Catmando's felines
(

"It is covered in cat poo. The curtains you can see through the window are filthy and are pinned together so the cats don't even get enough day light."

Catmando, who said he was pre-registered blind, had epilepsy and the skin disease psoriasis, said: "Having so many cats helps me.

"I don't drink, I don't smoke, I don't chase women. I sit down with the cats and it takes it all away.

"Plus a room full of cats keeps it warm."

The cat lover has hit back at the people who protest in the street and says that the stress of it all has caused one of the cats to have a miscarriage.

He said: "People say I'm taking their cats off the streets of Gainsborough.

"If that was true, why aren't the police doing anything about it? I'm the only person in the UK that can walk 15 solo at the same time – they follow me.

"What's so wrong with cat walkers? Everything is legal and above board. I'm a good person. I'm taking a stand because I have done nothing wrong.

Catmando receives large deliveries of cat food and said he also collects six chickens, six pieces of gammon, and 5lbs each of sausages and bacon from a butcher to feed the cats.

His neighbours had mixed feelings about Catmando and his house of cats.

One said: "He does not bother anyone. He feeds them and spends a lot on cat food and he walks them on a lead by the [River] Trent.

"They reckon he's crazy, but I think anyone who can walk several cats on a lead like he does is brilliant.

Retired mechanic Keith Saadik, 62, said: "Something has to be done.

"I think he's obsessed with cats. The RSPCA have been a couple of times and I believe they really should have done something in the past."

Caroline Marks, from Gainsborough Feral Rescue, said: "All the cats need to come out and hopefully be rehomed once they've been to the vets.

"I think he needs help. I think he should be prosecuted and banned from keeping animals."

A council spokesman said: "We are aware of concerns and are currently liaising with the Police. At this stage, we cannot comment any further while an investigation is underway.”

The RSPCA said it couldn't comment on individual cases and police said officers are working alongside the RSPCA to "establish the circumstances".

Previous : Dutch cops swoop on Brit with thick Scouse accent thinking he is Sicilian mafia boss
Next : Intuit bites off a lot with $12 bln Mailchimp deal