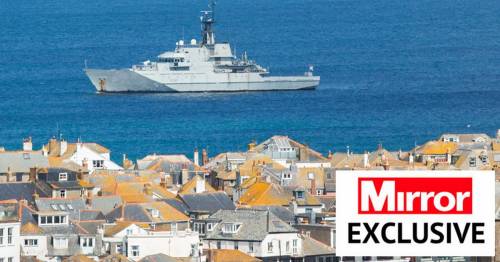 When Boris Johnson said in ­January that Cornwall would host this summer’s G7 summit, many doubted it would even go ahead.

Joe Biden was four days away from taking office as US President, Covid was spreading like wildfire and new restrictions had just been imposed.

Yet five months later here we are – and, so far, none of the seven global leaders has pulled out of this week’s gathering.

The Prime Minister, who as a child wanted to be “world king”, will host the first face-to-face meeting of the G7 in almost two years.

On Tuesday he said it “would be a great moment for the UK”, placing it at the centre of the global stage.

A No10 spokesman added: “The Prime Minister set out how the planet is facing some of its greatest challenges – from Covid-19 to tackling climate change – and highlighted how the next week provides an opportunity to reinvigorate the international community on these issues.”

Japanese premier Yoshihide Suga, Canadian PM Justin Trudeau and Italian leader Mario Draghi will also be whisked from the former RAF base to their bolthole at Carbis Bay, just outside St Ives.

Whether Biden will make the journey in the Beast – his £1.1million limousine with five-inch thick bulletproof windows – or Marine One, a Sikorsky VH-3D helicopter, is unclear.

3 – official days of the Cornwall summit.

5 – times as much as normal some hotels are charging for rooms during the G7.

6 – minimum number of coronavirus tests dignitaries and journalists attending the summit must take.

20 – degrees celsius predicted for the final day of the get-together.

Reports surfaced a few months ago that the Beast may be tamed by Cornwall’s narrow, winding lanes, making it impractical for the mission.

Once leaders arrive at the five-star Carbis Bay Hotel, they will no doubt be charmed by the spectacular view.

In the distance stands Godrevy Lighthouse, which inspired Virginia Woolf’s 1927 novel To the Lighthouse.

The hotel’s eight grass-topped lodges – separate from the main building, behind which stands a four-arch viaduct carrying trains, each boasts a patio, hot tub and balcony overlooking the bay.

Offshore, the Royal Navy has dispatched gunboat HMS Tyne to patrol the coast.

The weather gods will be smiling on the summit with 20C highs this weekend.

But while the sunshine can play its part, making this summit happen in the current climate has not been easy.

Securing the event against terrorists, eco-protesters and anti-capitalists is very high on the agenda.

But bolstering coronavirus protections has been at the forefront of planning, with journalists locked into a vigorous testing regime.

Yet despite the hassle of hosting a major summit during the pandemic, traffic gridlock and potential for medical mishap, Visit Cornwall chief Malcolm Bell has welcomed the boost for the local economy.

He said he faced a frantic build-up securing rooms for delegates and journalists, but “everything is lining up”.

Malcolm Bell welcomed the boost for the local economy
(

He said: “Looking out to sea can make you a bit calmer, more thoughtful.

"It gives a bit of perspective – even if you’re the seven most senior leaders in the world.

“It’s a good place to reflect.”

While the G7 summit in Cornwall is the first foreign trip for Joe Biden since he entered the White House, it also marks Carrie Johnson’s debut on the world stage.

The 33-year-old environmentalist and oceans campaigner, who as Ms Symonds wed the Prime Minister just 10 days ago, will lead the spouses in a set of events designed to promote Britain abroad.

But who are they?

Seasoned political activist who has worked on various Tory campaigns and for high-profile party figures.

Pals praise her passion and generosity but warn that she can be vengeful if crossed.

The US First Lady, 70, is a professor of English at Northern Virginia Community College.

She married Joe Biden in 1977, becoming stepmother to Beau and Hunter, his two sons from his first marriage.

At 46, Canadian First Lady Sophie Grégoire Trudeau is the closest in age to Mrs Johnson.

The 72-year-old husband of Angela Merkel is the only male spouse.

The quantum chemist is professor emeritus of physical and theoretical chemistry at the Humboldt University of Berlin.

Little is known about Mariko Suga, the wife of Japanese PMYoshihide.

She is the sister of one of his former colleagues in the office of former trade minister Hikosaburo Okonog.

The most recognisable G7 spouse is the 68-year-old French First Lady who used to teach her husband, President Emmanuel Macron – who is 24 years younger.

Serena Cappello, 73, has been married to Italian leader Mario Draghi since 1973.

Profiles describe her as “reserved and elegant”, highlighting her “great passion” for English literature.

4 big topics on the table

1. “Leading the global recovery from coronavirus while strengthening our resilience against future pandemics.”

Watch closely for what emerges on the issue of sending vaccines to poorer countries.

2. “Promoting our future prosperity by championing free and fair trade.”

Problems with sending goods between Northern Ireland and Britain could undermine the PM’s enthusiasm for scrapping trade tariffs and quotas.

Matching action to the PM’s green rhetoric will squeeze budgets. In green terms, G7 is a warm-up for COP26 in Glasgow in November.

Can be interpreted as a call to take a stand against secretive, militaristic China and Russia, which harbours hackers and tried to kill an agent on UK soil.

Previous : Angelina Jolie admits she scared child who mistook her for evil witch Maleficent
Next : Speakers denounce anti-Muslim hate at vigil for family killed in attack