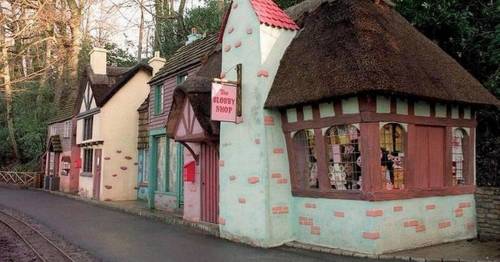 TV personality Noel Edmonds, famous for presenting Noel's House Party and Deal or No Deal, opened the Mr Blobby-theme park in Crinkley Bottom at Cricket St Thomas near Chard in Somerset in 1994.

Blobbyland opened for three years until 1997- until the site was demolished seven years ago.

But video and images of the derelict site have remerged showing the remains of the once creepy theme park, SomersetLive reports.

An 11-minute YouTube video includes the TV ad for the theme park and footage of the Mr Blobby theme park in its heyday.

Footage also shows the attraction in a derelict state, years after its demise, with Mr Blobby's house overgrown and strewn with rubbish.

A look inside the eerie theme park that once was shows the demise of the park.

What happened to Crinkley Bottom at Cricket St Thomas?

Crinkley Bottom, or 'Blobbyland' opened in Cricket St Thomas, Somerset in 1994 in the height of Blobbymania, when the pink spotty sidekick starred in Noel Edmonds' House Party.

It was developed in the grounds of Cricket House, at Cricket St Thomas, which was already a popular local attraction in the 1990s with wildlife enclosures and an an adventure park.

A map of the Crinkley Bottom theme park shows a railway, an Animals of Farthing Wood attraction alongside sea lion shows, a safari ride, fun village, a deer park and leopards.

There was also a TV's family favourites attraction and a high street featuring the Blobby Shop.

The main pull of the park for 90s kids was, of course, Mr Blobby's house.

Dunblobbin, painted bright pink with yellow spots and a blue roof, was surrounded by a white picket fence and had windowsills adorned with blooming plastic flowers.

The TV personality opened his own Mr Blobby-themed theme park
(

Next to its iconic front door, where everyone wanted their photo taken, was a doorbell which could be pressed to hear the familiar shrill cry of "Blobby Blobby Blobby!"

It closed down five years later, but its buildings remained on the site, abandoned and standing eerily empty until explorers discovered Mr Blobby's derelict house in 2009.

When the theme park closed in the late 1990s, the buildings were left standing until they were discovered by urban explorers in 2009.

The explorers filmed their gem of a find and the resulting pictures and videos went viral among nostalgic 90s kids.

Interest generated by these images was so great, people started flocking to Cricket St Thomas in Somerset to break into the now-empty Blobbyland.

Efforts were made by the site owners to stop people breaking in – including blocking up an access tunnel – but eventually the site was demolished in 2014.

Previous : Princess Diana’s ’embarrassing’ supermodel prank for William made him fall over
Next : Anthony Joshua told “his chin is gone” ahead of Oleksandr Usyk rematch