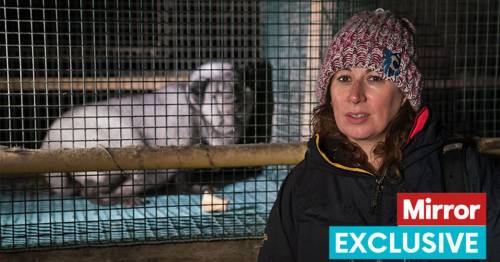 I am staring into the eyes of an animal which has spent its entire miserable, tormented life trapped in a tiny, barren cage so that it can become a frivolous fashion item.

This distressed Arctic fox is missing an ear. Others pace incessantly and have pulled out their overgrown fur – signs of psychological distress.

They have deformed feet, diseased eyes and some of them are so obese they are what is known as “monster foxes”, despite the fur trade promising in 2017 to stop breeding oversized animals to increase the volume of fur.

I am in Finland, the biggest producer of fox fur in Europe, on one of three undercover farm visits in the Ostrobothnia region, known as the capital of fox fur farming.

An Arctic fox in a tiny cage
(

Since banning fur farming in 2000 on ethical grounds, the UK has imported more than £850million of fur, £11m of it from Finland.

It is used for fashion items sold in stores such as Harrods, Harvey Nichols and Flannels but if the people who buy it could see the suffering that goes into this trade, they are likely to think twice.

The animals are in cages around a metre square, with no bedding.

Their awful lives are mercifully short – most are electrocuted at just eight months old before being skinned.

Nada in Harvey Nichols with a coat containing Finnish fur
(

As we walk by torchlight at 4am through thick snow, Kristo tells me what I just witnessed was “the norm”.

He says: “I have visited more than 100 fur farms and witnessed the systemic suffering of animals – intelligent, wild predators kept in small, barren cages, row after row.

“Individual care is impossible and, along with the psychological suffering, you will always see untreated ill­­nesses and injuries.”

The poor creatures are caged
(

Vet Marc tells me: “It was not only truly depressing to see the appalling state of these foxes but still worse to know that the UK is 100% complicit in this legal fur trade cruelty.

“Many had painfully swollen eyes, deformed feet with overgrown claws from having to stand on the wire floor.

“Others had poor body condition and obesity, not to mention self-­mutilation. It must be mental torture being denied the freedom to run.”

Their awful lives are mercifully short
(

Claire says: “Industry PR spin about high welfare rings incredibly hollow when you are staring into the eyes of an animal mentally and physically broken by a life of deprivation.

“It’s time to stop being complicit in this cruelty. It’s a clear double standard that the UK is outsourcing to countries like Finland the very same fur farm cruelty we banned here.”

The UK has imported more than £850million of fur, £11m of it from Finland

Nada outside Harrdos with a hat containing Finnish fox fur
(

Each year, one to two million foxes are raised on around 750 fur farms in Finland. In our probe, no Finnish laws were broken and no trespass took place.

The Finnish Fur Breeders’ Association FIFUR said: “Clandestine filmings and their selective use tell nothing about the level of animal care and welfare. Responsible farmers treat their animals as soon as they become aware of any health issues.

“Trespassers will not know if the animal has received treatment or at what stage this is at. All operations are strictly controlled by national laws.”

Two of the three farms we visited were certified by the industry’s SAGA furs assurance scheme, promising the “highest level of welfare”.

Since the Mirror launched the Fur Free Britain campaign with Humane Society International/UK in July 2020 we have revealed horrific cases of suffering in China, Denmark, France and Poland.

Items made from Finnish Arctic foxes, including hats, scarves and coats, can be found on sale in upmarket UK stores.

Though many retailers, including Selfridges and Net-a-Porter, now refuse to sell fur, Harrods, House of Fraser, Harvey Nichols and Flannels continue to sell brands such as Fendi, Moncler, Yves Salomon, Woolrich, Herno and Max Mara.

In Harrods, we found an Yves Salomon cashmere hat with a Finnish fox fur pompom for £220 and Herno women’s jackets with fur hood trims.

Most fur produced in Finland is sent to Saga Furs, a marketing brand and auction house near Helsinki. Its certification scheme claims its farms provide good animal health and welfare.

Two of the farms the Mirror visited last month had this certification despite being full of distressed animals. Items on sale in the UK declaring these high welfare standards include a £1,785 fox fur-trimmed Max Mara cape.

In February, a Mirror investigation revealed how House of Fraser stores displayed signs reading “No fur products stocked in House of Fraser” above racks of real fur garments.

Another exposé revealed animal fur items labelled as faux fur were being sold on sites such as Amazon and eBay.

Max Mara and Harrods did not respond to our request for comment.

Previous : Bread prices could soar by 20% in weeks as wheat price hits nine-year high
Next : In Kenosha and beyond, guns become more common on US streets