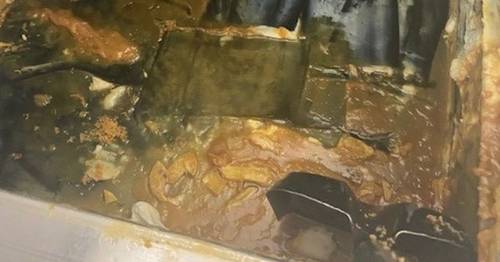 These stomach-churning pictures show the inside of a 'filthy' fish and chip shop where chopping boards were covered in thick black grime.

Cooked food was left outside to cool down and ingredients were even stored on the floor of the takeaway, YorkshireLive reports.

The shop kept a tray of ribs cooling in a warm oven and left raw fish in a washing up bowl in a fridge which was warmer than it should have been.

Despite the countless errors, employees were unfazed by the horrific conditions and "showed little understanding of the risk this may pose".

The business said that while it agreed with the remarks from Barnsley Metropolitan Borough Council, a number of improvements have been made since the inspection on July 14.

Chopping boards at the shop were covered in black grime
(

However, the chip shop has been slapped with a zero-star food hygiene rating by the Food Standards Agency (FSA) – the lowest possible grade.

Officials carried out a full food hygiene rating at the chip shop in School Street, Darfield, and filed a troubling report.

Among the most concerning findings were the shocking conditions in which food was kept.

"Food was being stored on the floor of the main cooking area and was at risk of bacterial contamination," said the inspector.

Inspectors said the chopping boards were 'in a filthy condition'
(

Raw fish was stored in a washing up bowl in the fridge, which was warmer than it should have been
(

The picture above shows bowls of food lying on the floor as a member of staff works nearby. Food was also found being prepared and stored outside, posing further risks to customers, while cooked rice was left out to cool at room temperature.

Once food was cooked, it was sometimes left in the "danger zone".

The inspector spotted a tray of ribs cooling in a warm oven on their visit, which presented the "ideal conditions for food positioning bacteria".

There was a "general lack of cleaning… and hand washing" from staff, storage containers were damaged and dirty and there were not even enough cleaning supplies in the building.

One area of particular concern was the risk of cross-contamination.

Food was also stored on the floor in the shop
(

Raw meat was being prepared next to cooked food which was about to be served.

The conditions didn't appear to improve in the fridges either. Here, raw meat and prepared food were stored on the same shelves.

The temperature of the fridge – where raw fish was kept in a washing up bowl – was 12.9°C, almost 8°C warmer than FSA recommendations.

Raw meat was also stored unwrapped in freezers, while the lid to one of the chest freezers at the chip shop did not close properly.

"You must not prepare food for customers who declare they have a food allergy as you are unable to safely prepare food for them to eliminate risk from… cross-contamination," said the inspector.

One of the most startling pictures is of the chopping boards at Amy's Fish and Chips. These were used by staff for prepared food, but the images show how they are covered in black grime.

"Chopping boards used for the preparation of ready to eat food items were found to be in a filthy condition," said the report.

Remarkably, staff told inspectors this was "acceptable" and "showed little understanding of the risk this may pose".

The problems didn't end there though.

The thermometer probe was dirty, but it appears as though the staff didn't use it anyway.

Instead, they simply copied temperature records from previous entries, rather than actually checking the food.

The report added that most of the issues highlighted in the 2021 inspection were also found during previous visits and little progress had been made.

"The hygiene and safety standards noted on this inspection fall well below those expected," it concluded.

Since the inspection, Amy's Fish and Chips have filed a brief update to FSA.

They claim "the premises have been thoroughly cleaned and procedures are now in place to ensure that cleanliness is maintained".

The owner has also stated that "staff have been trained / re-trained and are under better supervision" and "a new Food Safety Management system has been introduced".

Previous : BBC SPOTY could take place without favourites Emma Raducanu and Tyson Fury
Next : Doctors furious about threat to ‘shame’ GPs over face to face appointments