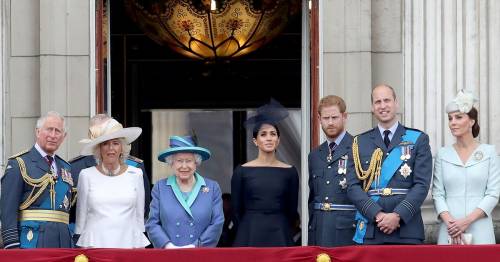 As 2020 dawned, Prince Harry and Meghan Markle made a bombshell statement about their future.

On January 8, 2020, the pair said they were leaving The Firm to seek privacy – and their fortune – elsewhere.

The shock announcement is said to have blindsided the royals, as they revealed they planned to split their time between the UK and North America and would carve out "a progression new role in the institution" while becoming financially independent.

Days later on January 13 – exactly two years ago today – unprecedented crunch talks were held in what became known as the Sandringham Summit between Harry, the Queen, Prince Charles and Prince William.

What was the Sandringham Summit?

Meghan and Harry's statement days earlier that they were stepping down as senior royals is said to have come as a surprise to the Queen.

In the days that followed, the Queen and her heirs, Princes Charles and William, ordered a series of crisis talks to deal with the wantaway couple, forcing Harry to a Sandringham Summit at the royals’ Norfolk estate. Meghan did not take part in the talks.

Gathering in the Long Library of the family’s 19th century Sandringham estate, the royals looked each other in the eye and agreed to find a resolution.

What happened at the Sandringham Summit?

Chairing the meeting, across a large polished table with room for eight chairs, the Queen and her family set out their vision of how a new version of monarchy would emerge.

Among the topics discussed are thought to have been titles, finances and security.

The emergency meeting ended with the Queen reluctantly granting her grandson and his wife permission to step down as senior royals.

Agreements were put in place alongside a 12-month review of the thrashed-out agreement, in which they promised to “continue to uphold the values of Her Majesty” while getting their independence.

However, one book claims that William refused to eat with Prince Harry at a summit – leaving him to dine alone with the Queen.

According to Robert Lacey's book Battle of Brothers, William was distraught after Harry and Meghan announced they wanted to step down as senior members of the Royal Family with a statement on social media.

Prince William was among the royals at the summit
(

Lacey wrote: "The Queen had suggested the family should gather for lunch before their big pow-wow in the library that afternoon, but he refused his grandmother’s invitation.

"He would obviously turn up at 2pm for the meeting, he said, but he only wanted to talk business.

"The Prince himself has not confirmed his friends’ speculation that he was so furious with his younger brother that he would not be able to endure the hypocrisy of smiling at him over lunch."

Harry and Meghan alongside Harry's grandmother the Queen
(

Following the summit, a statement from the Queen said the groups had “constructive discussions on the future of my grandson and his family”.

It added: “My family and I are entirely supportive of their desire to create a new life.

“Although we would have preferred them to remain full-time working members of the Royal Family, we respect and understand their wish to live a more independent life while remaining a valued part of my family.”

Harry and Meghan during their interview with Oprah Winfrey
(

Now two years on from the summit, a lot has changed for Harry and Meghan.

They've now settled in California, signed several big-money deals with the likes of Netflix and Spotify, given a bombshell interview with Oprah Winfrey and welcomed a daughter called Lilibet.

In their Oprah interview, they made a series of shocking and controversial claims about their time as senior royals.

The last time William and Harry were pictured together in public
(

Meghan claimed she had been refused mental health treatment after revealing to palace staff that she was struggling with suicidal thoughts while she was pregnant with their son Archie.

The couple also claimed that questions had been asked about what colour Archie's skin would be.

Harry accused his dad of cutting him off financially and claimed he had stopped taking his calls.

Last month, it was reported that Harry and Charles had barely spoken in eight months, with their relationship at an all-time low.

Meanwhile, Harry also reportedly continues to have a frosty relationship with brother William.

According to friends, after the Oprah interview, William was left feeling "very upset" and "reeling" over the claims, with his head "all over the place".

And a source has now told the Sunday Times that he was still "furious" several months later and didn't want to attend the Diana statue unveiling with his brother, who jetted in from California for the event last July.