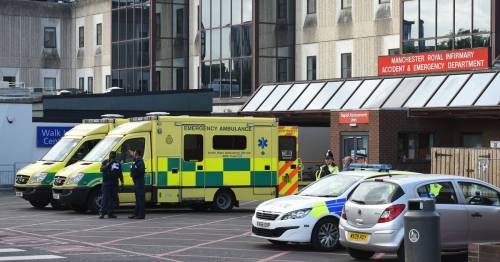 Every single patient admitted to a coronavirus intensive care unit in August was unvaccinated, it has been reported.

The unit at Manchester Royal Infirmary's treats those who are the most sick from the virus, with most of the patients being in their 20s to 40s.

This means that the age range of the patients is significantly younger than what is to be expected, Manchester Evening News reports.

One of the patients, Natalie Baker, 40, was admitted to Manchester Royal Infirmary (MRI) after being infected with the virus and struggling to manage her symptoms at home.

She was admitted to the intensive care unit (ICU) with the possibility that she may not survive.

All of the patients admitted to the Covid ICU in August were aged 20-40, doctors say.
(

Speaking about the vaccine, which she has since decided to have, Natalie said: "I just wanted more time to see how it worked and how it affected people," she said.

"I'll be doing it for my children.

"When I was lying there in intensive care I thought – there is a chance my kids are going to be left without a mum."

The mortality rate for people in Natalie's age group stands at 22.8 per 100,000 people, according to government statistics, making it unusual that she is the oldest person in her ICU ward to be battling the virus.

"We've seen 30-year-olds in here with no previous medical history. There are still a lot of people passing away," said Emily Edwards, the manager of the critical care ward.

"When the patients come in to us they are usually awake and they are aware of that, and it's just the regret they've got," she says.

"You ask them why they've not had the vaccine and it's usually that they've prioritised other things like working, and just haven't had the time for it.

"That's what is quite hard to see because as they progress with the illness and get worse; the regret is there."

There have also been a number of pregnant women and mums who have just had a baby who have been admitted, and sadly, not all of them have survived.

One of the doctors on the ward, Dr Henry Morris, estimates that there have been around 10 to 15 unvaccinated pregnant women on the ward.

He suggests that this could be partly due to the fact that there are doubt around the safety of vaccines for pregnant women, despite it now being proven that they can be jabbed.

Doctors fear that the number of patients will surge once 'unknown patients' begin to seek treatments and delayed treatments are rescheduled.
(

The young demographic of patients has been very distressing for the hospital's staff.

"Nursing younger patients has posed a new challenge for my staff," says Kerri-Anne Folkard, who is ward manager of Ward 9 COVID.

"Lots of my staff wouldn't have been used to nursing patients that are younger before the pandemic, so that has given cause for reflection certainly," Kerri-Anne added.

The majority of the patients in Ward 9 who have been infected with virus, have not been vaccinated either.

Whereas, those in the ward who have been vaccinated have been admitted after having other illnesses, and then catching the virus on top.

One of the patients, Candy Gilette, 62, was originally admitted to hospital because of her COPD and stage two respiratory failure said: "If I hadn't been double jabbed I probably wouldn't still be here."

Dr Morriss explains that the pressure is really on for hospital staff, who have to balance treating the unvaccinated, those who are in ICU for other reason, and also performing surgeries.

There is also a huge backlog of patients who had to have their treatment delayed because of a lack of hospital beds.

"We are moving heaven and earth to get these people with delayed cancer surgeries through, but there's only a finite number of beds.

"Clearly that's heart-breaking – if you've worked yourself up for a big operation and being told you can't have it done because there are no beds is very upsetting."

There is also the 'unknown wave' of patients to consider, who may have not sought medical treatment during the pandemic who will now flock to hospitals as society continues to return to normality.

Dr Morriss and his team express that they hope more people will take up the coronavirus vaccine in order to better conditions on the frontline.

Previous : Funeral to be held for Indiana Marine killed in Afghanistan
Next : Dad told partner ‘don’t leave me alone with screaming baby’ before hurling her into cot