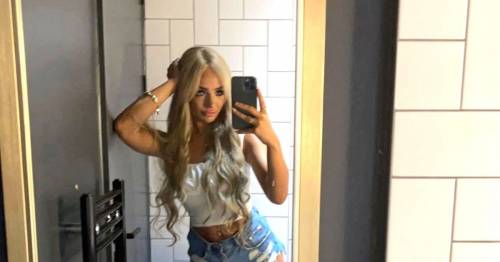 An innocent man who lost his job and was arrested six times after his ex fed the police a web of lies said he felt he would be "better off dead".

Lewis Jolly, spent 81 hours in police custody and even had his home raided by cops, after his ex girlfriend of two years claimed he was sending her "vile threats".

Courtney Ireland-Ainsworth created over 30 fake accounts to send herself the abuse and even gave officers pictures of a scar on her chest, which she claimed Lewis had inflicted with a knife, the LiverpoolEcho reported.

But her deceit was uncovered when Instagram and Facebook revealed that the email and IP addresses linked with the accounts belonged to Ireland-Ainsworth.

Ireland Ainsworth, now 20, of Brackendale, Runcorn, admitted perverting the cause of justice at Liverpool Crown Court as a victim impact statement from her ex boyfriend was read out in court.

Mr Jolly said: "I was charged with stalking offences and assaults that I had not committed. I was denied bail on one occasion and put before the court the next morning.

"I felt like I was very close to being remanded into custody for a crime I had not committed."

Mr Jolly said being under investigation for four months was "the worst experience of my life".

Mr Jolly said police repeatedly turned up at his family's home in the early hours of the morning to arrest him, and officers searched the property and seized two of his mobile phones.

He said: "In between each arrest I lived in a constant state of anxiety, thinking that the police were going to arrive at any minute and arrest me again.

"I told police that I wasn't behind these Instagram accounts and that I felt like I was being set up, but yet each time Ainsworth reported something, I was arrested again.

"I felt powerless and didn't know how to protect myself from these allegations. I felt frustrated as it felt like no one was listening to me.

"At one stage I asked police to install CCTV in my address and to fit a GPS tracker to me, in an effort to prove my innocence.

"After my second mobile phone was seized by police, I decided not to get another one and no longer accessed social media or the internet. Other than going to work and occasionally going fishing, I stopped going out.

"I spent most of my time at home with my mum, so that I had an alibi for any future allegations."

Ireland-Ainsworth told police her former partner was stalking and harassing her, had verbally and physically abused her, put a brick through her nan's window, and threatened to stab her and her new boyfriend.

She also falsely claimed Jolly had warned her: "She is getting a f***ing blade in her chest".

Ainsworth also reported him for stalking her friends, making false claims she was using cocaine, calling her from withheld numbers and filming her walking down the street.

During her campaign, innocent Lewis was charged with assault and stalking, hit with a stalking protection order, bailed on a home curfew with an electronic tag, and even lost his job as a result repeatedly getting arrested.

Mr Jolly, 22, said they had been together for two years but split up on "okay terms" in October 2019, before Ireland-Ainsworth started seeing a new boyfriend, a man called Declan Rice.

He said: "This was frustrating for my employer. I explained to him that the allegations were malicious and that I hadn't done anything wrong and at first he was understanding, but in the end he had to let me go as I was repeatedly missing work and having to attend court hearings."

The experience had a "massive effect" on his physical and mental health, as he battled stress.

He said: "I lost weight as a result of this. It was affecting my sleep – I couldn't relax. I found that I struggled to sleep and when I could, it was broken.

"I started drinking more in an effort to help relax me and help me sleep. I found myself feeling very emotional at times and would break down crying.

"I've suffered panic attacks. I found that I was agitated and jumpy, particularly at night, and if someone knocked on the front door.

"I found that when I was working, I couldn't concentrate, my mind was elsewhere and this was affecting my work.

"At my lowest point I felt like life wasn't worth living and thought to myself that I'd be better off dead."

Ireland-Ainsworth, who has no previous convictions, claimed she had been suffering from PTSD in her defence.

Jim Smith, defending, said his client was 19 at the time, immature and diagnosed as suffering from "complex" post-traumatic stress disorder (PTSD).

He said a psychiatrist found her offending could be "partly understood" in the context of her mental health problems and difficulty in "managing intimate personal relationships".

But Mr Jolly said the impact of her crimes had not just left him "a shell of a man" but also affected his family, including his younger sister and brother.

In his statement he said that they had received threats and one of their windows was smashed.

Mr Jolly said: "Since then my sister has been on pins, she wouldn't sleep in her own bed.

"I share a bedroom with my brother and every time the police arrested me our bedroom was searched, which invaded his private space.

"He was studying for his GCSEs at the time and was repeatedly woken up in the night when the police were arresting me and made to leave the bedroom while the police searched it.

"My mum has been off work with stress and anxiety – all linked to what I've been through. My mum, brother and sister have also received counselling.

"My dad had to take time away from his business to accompany me at court. This had a knock on effect and put him under financial pressure.

"The consequences of Ainsworth's false allegations in this case really can't be underestimated."

Previous : Mum slams school for new lining up rule forcing kids to do ‘Hitler salute’
Next : How much more transmissible is Omicron and can you be reinfected easily? – World News