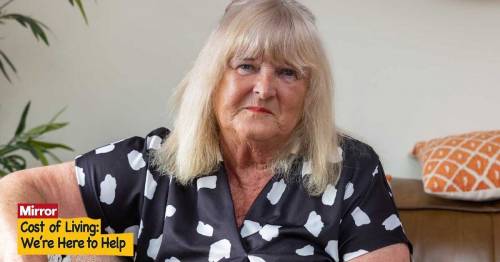 Tory Party voters in former "Red Wall" seats of the North east are furious with Boris Johnson 's dire handling of the cost of living crisis.

The region has the highest rate of eligibility for free school meals in the country. Queues at the 'People's Kitchen' on Tyneside, a free hot meals service, have more than doubled.

Food banks in cities and rural communities are running short of supplies due to unprecedented demand.

Johnson's record is losing him not only former Labour voters – but True Blue Tories.

New analysis by YouGov claims the party is currently on track for large scale losses in key "Red Wall" battle ground seats if nothing changes before voters next head to the polls.

The research firm estimates that, of 88 key swing seats, just three would stay in Conservative hands if a vote were held now.

Pam Smailes has been forced to take on three extra jobs
(

It covered those that were either gained from Labour in 2019 or are currently held by the Tories with a margin of less than 15 points.

Pam Smailes is a Conservative councillor in Yarm on Teesside – but 'really disillusioned' with his leadership.

At 72, she has taken on three extra jobs – with an estate agency, providing online tuition and exam paper marking – just to make ends meet.

She said: "I cannot see an end to it. I am lucky that I have the skills to do it, I am not complaining.

"There are millions like me. These jobs are not about keeping up a standard of living. It is about paying the bills."

She added: "I used to be for Boris, but I am getting really disillusioned. He comes out with a national food strategy, which is really good but how much will be used? How much of it will be implemented?

"I am sick of hearing about Partygate, there are bigger problems in this world. It has got us away from the important issues, which are food, fuel and bills.

"I am really going to have to think about what I do at the next election."

Pam Smailes is a Conservative councillor in Yarm on Teesside
(

Pam has been reduced to 'living on vegetables' in her weekly shop rather than steak or chicken, and grows her own tomatoes.

She has cut use of her car to a bare minimum because of her monthly mortgage payments of £460 from her £790-a-month pension.

Separated from her husband and fiercely independent, she added: "I don't think any of the career politicians are any good.

"Very few MPs are there for the people. There are former doctors, lawyers, they retire and go into
Parliament and become millionaires."

Chris Zarraga represents 1,150 schools as Director of Schools North East and is trustee of a school in nearby Middlesbrough which lays on free school meals in the summer holidays.

"Many families struggle out of term time," he explains. "School budgets are under so much pressure due to fuel costs and heating. It is quite a horrendous issue in urban areas and rural locations."

In Newcastle, food charity The People's Kitchen has doubled the number of meals served each day to almost 300, with parents leaving with takeaways for their children to save money on cooking.

When the Mirror visited there were around 70 queueing up outside. John McCorry, chief executive of the Newcastle West End Food Bank featured in the film 'I, Daniel Blake', told how hard-pressed families – including 14,500 children – were helped with food parcels by their service last year.

He said: "People are finding their income squeezed by more and more demands. The Government is assisting with MoT charges – most of the people we help cannot afford a car."

It is not just inner cities. Widower John Rowland, a lifelong Tory voter, lives in a remote stone cottage high on the North Yorkshire moors in Rishi Sunak's Richmond constituency.

While Mr Sunak is building a swimming pool at his home, Tory voters like Mr Rowland are struggling to make ends meet.

Heating for his 600-year-old property has rocketed to £3,000-a-year, even 'turned down to the lowest setting'.

His pensions add up to around £1,300 a month. In the past three years, he has had to draw down on savings just to make ends meet following the death of his partner.

He needs to take out £500-a-month to meet his basic shopping and fuel bills but says: "My heart bleeds for the people who don't have that money to draw on.

"Single old aged pensioners are finding it very difficult and even couples are having to be careful. Do we start selling things? That is one of the questions – I have started selling assets.

"This country is in one hell of a state. I have always voted Conservative. But I don't particularly like Boris Johnson. I don't think his morals are quite what they should be.

"Is there anybody better at the moment? My MP here is the Chancellor Mr Sunak and he has been accused of a lot of things as well. So has Mr Starmer.

"I think MPs live in a different world, do they really understand how the ordinary man and woman lives? I don't think they do. People are concerned about it.

"Paying half a million pounds to take people on a plane to Rwanda with seven people on it. Just to hire one plane. It just does not add up."

He does voluntary work for Age UK, who spent hours helping him receive support even though the charity has been hit by cuts to funding. But even their vital charity work is facing unprecedented demands.

They helped one pensioner in Harrogate who was riding around on a bus all day, worried about heating her home. Yet they lost £135,000 in local authority funding over lockdown.

She said: "For us, we can stay with people for many years, they will get frailer and more vulnerable, we can improve their circumstances and everyday life, but we need to stay alongside them.

"You cannot do it in just a few weeks, we can do it differently, but not without funding.

"We are being innovative, trying to raise awareness, and looking for money from trusts and foundations.

"But charities are having to work very hard to get the funding they need to survive."

Previous : Hottest day of the year officially declared as Britain hotter than Sahara
Next : ‘Lord Geidt’s resignation is proof of rottenness at the heart of Downing Street’ – Voice of the Mirror