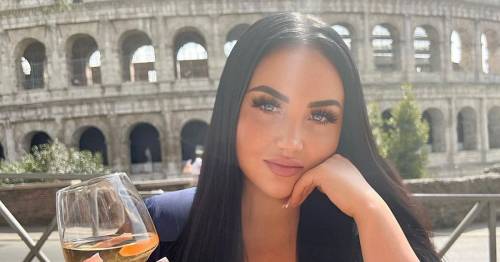 A woman desperate to get a breast reduction has told how her 34HH boobs helped her pay off her family’s £130,000 total debt.

She used to be self-conscious about her figure – and hated the comments from strangers when she went out clubbing with friends.

"Usually when I’d go to clubs or out in public it would be women who’d tell me to ‘put them away’ because their boyfriends were staring,” Amy said.

"I usually ignore it but once I got kicked out of a nightclub for flashing this one girl who told me to cover up. I was just sick of it.

Amy makes her money on Only Fans
(

She used to always slouch forward to hide my boobs
(

"I’ve got such bad posture because of how I used to always slouch forward to hide my boobs because when I kept my back straight it made them look even more prominent and I hated that attention.

"Now the stares and comments don’t bother me. I know they are just jealous or have body issues, they obviously aren’t happy in their own skin.”

Amy previously worked as a spa therapist earning £8.50 an hour when she decided to start an OnlyFans page in October 2019.

She says the site gave her back her confidence and helped her embrace her curvy figure – and pay off her £30,000 debt from payday loans.

Amy said: "I always wanted a champagne lifestyle on a Coca Cola budget. I went on foreign holidays and always bought new clothes.

"Because of the high interest on payday loans, I was stuck in a vicious cycle.

"Then there was a buzz around this new site, OnlyFans, and something just told me to do it for the money.

"I knew my boobs were attention-grabbing so I decided to use them for my benefit instead of hiding away.

Have you ever paid off a big debt? Email rosaleen.fenton@reachplc.com

She said: "Helping my family to be debt-free was the first thing I did with the money. It took about four or five months before I started earning big before I could do it.

"Mum was so grateful. She fully supports what I do and she always has from the start. The people who are important to me in my family have been supportive and that’s all that matters.

“I’m so lucky I have such an understanding family behind me. I love them so much.”

As a teenager, Amy struggled as her figure "changed overnight".

She said: “I woke up one day when I was around 15 and it’s almost like my boobs just grew overnight they were huge.

“I slowly began to dislike them as they grew bigger and bigger. I felt like I struggled to hide them and people would stare a lot.

When she was 23, she went to see a doctor about having a breast reduction but the details of the surgery were so intimidating that Amy took some more time to think about it.

She said: “I was sick of the attention, of men staring. I couldn’t enjoy shopping and buy nice clothes.

"I also felt like my big chest made me look fat because they hid my shape in clothes. I learned what a serious procedure a reduction is so I took my time to think about it.

"But during this thinking time I discovered Only Fans. That’s when I started to embrace them.

"The positive attention really changed my mindset. I realised a lot of the guys on there love my boobs and now they are my money-makers.”

Amy likes to spend her earnings on clothes, fine dining and luxury trips – and has been to Mexico, the Maldives, Rome, Thailand, Las Vegas and all over Europe.

The model added: “I’ve always wanted nice things and to do the finer things in life.

"Now I can live the life I’ve always dreamed and wanted so badly.

“I do what I do for money, which gives me freedom and freedom is everything to me.”