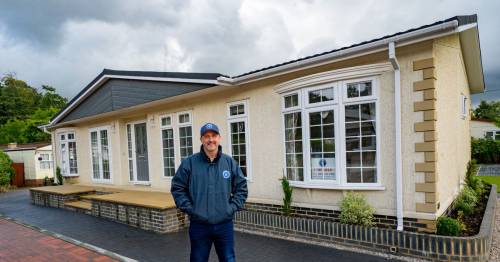 The UK's richest gypsy is set to come become a billionaire after being born in a caravan on the side of the road.

Alfie Best, 52, who lives in a £6million Surrey mansion, owns the UK's largest residential home parks empire with his company, Wyldecrest Parks, operating 97 sites up and down the country.

His business has become so successful Alfie believes he will hit 108 parks by the end of the year – and will become a billionaire once he hits the target.

Alfie, who was born near Leicester in a caravan on the side of a road during a snow blizzard, received an offer of £950m for the businesses he founded – but turned it down.

The self made millionaire at his Surrey home with his Bugatti, Ferrari, Rolls Royce and Range Rover
(

With pending deals ready to go and contracts already in the business, he believes his company should finish the year at £800m and, depending how the market goes, will have a huge £1billion in assets.

Even though the offer he received would have made him a billionaire Alfie, who is worth a whopping £700m according to the latest Sunday Times Rich List, decided to turn down the offer and instead spend some of his fortunate on a new helicopter instead.

He spent a staggering £4.5million on a brand new helicopter – which is designed by Aston Martin – and is just one of 15 having ever been made.

The ACH130 chopper has seven seats, a high-end GPS system, and an apt registration of G-YPSE.

Alfie inside the seven seat 007 chopper with his son, Alfie
(

A remarkable feat for even Alfie, who comes from humble beginnings, as he told The Sun : "It’s incredible – it’s a long way from my first-ever vehicle, a Ford Escort, which I sold for eleven hundred quid."

Inside the luxury chopper there is a small plaque which says 'Aston Martin G-YPS, Edition Number 007, built for Alfie Best' – which is in tribute to being given the 007 helicopter, which is built by James Bond's favourite car company

He said: “007 – it does make me smile. But I swear to you it was a lovely, fantastic surprise getting that serial number because just 15 of these been ever built and we have ended up with the only one in the world that is double-O seven.

“I thought, I hope James Bond is okay with gypsy scrawled all over the side of it! I’m no longer going to go with the Gypsy Millionaire, I’m now Gypsy Bond.”

The millionaire claims the chopper has been bought for work purposes
(

Alfie claims the chopper has been bought for work purposes which will allow him to visit five parks a day and save him driving on the motorway to all his parks across the country.

But despite being able to fly he has chosen to employ a pilot after crashing a helicopter when he was practicing taking off and landing with his instructor.

During one incident he got stuck in the grass and the other on a concrete pad as it slipped on its side.

Alfie aged one with his father Alfie
(

Fortunately, Alfie escaped with just a cut to his cheek but his instructor was in intensive care for a week with injuries.

However, after purchasing a brand new £4m helicopter, he was not put off by his past experiences.

He instead chose to purchase a new chopper and is now taking his private pilot's licence but has vowed to never fly without a pilot.