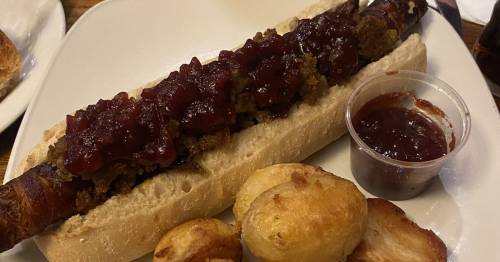 There are many wonderful things about Christmas; spending time with loved ones and receiving lots of pressies, but I think we can all agree that the best part of the festive season is the food.

In the countdown to Santa's trip down the chimney, it's acceptable to eat whatever you want, whenever you want, from Celebrations to After Eights and mini pizzas to literally any type of cheese.

The best festive food, however, has got to be the delicious delicacy that is the pig in blanket, which, for some unknown reason, only seems to appear in people's fridges during the countdown to Christmas.

I went along to try it for myself

The foot-long sausage appeared even bigger than anticipated

In honour of the festive favourite treat, Toby Carvery has launched its very own foot-long Festive Super Pig and I decided to go along to my local restaurant in Chadderton, Oldham, to see if it lived up to the hype. Spoiler alert: It will give you all the Christmas feels.

The Festive Super Pig is essentially a giant pig in blanket, which you can get on its own as a side, served with cranberry or BBQ sauce for a modest £5.49. Or, you can do what I did and go the whole hog, by getting the Festive Super Pig as a main course, served in a ciabatta with turkey, stuffing and cranberry chutney, with salad or roasties on the side.

In for a penny, in for a pound, I decided to go for the main course, opting for roasties on the side, obviously, which came to very reasonable £7.49, given the sheer size of the meal. Before ordering I was well aware the Super Pig would large, measuring in at around 30 centimetres or a foot long, and yet it somehow seemed so much bigger when presented on a dinner plate in front of me.

It was served with cranberry chutney and roasties

I asked for some extra gravy on the side

For full disclosure, I didn't pick up the Super Pig and eat it like a hot dog; instead I used my knife and fork to carefully disseminate the extra large sausage sarnie and carefully dipped each piece into the pot of cranberry on the side. The sausage was tasty, the bacon extra crispy, which is a personal preference of mine.

The turkey, which lined the ciabatta, was pleasant but a little unnecessary, as it went completely unnoticed next to the much stronger flavours from the sausage, bacon, stuffing and cranberry. But, still, is it really a Christmas sandwich without turkey? The stuffing was delicious and the cranberry was super tasty but extremely sweet.

I asked the lovely waitress for a side of gravy, and she was more than happy to oblige. I mostly wanted it for the roasties, but ended up pouring it over the remainder of my Super Pig, which pleasantly counteracted the sweetness of the cranberry chutney.

In the interest of being completely honest, I didn't quite manage to finish my foot-long Festive Super Pig in its entirety, instead opting to finish the fillings, leaving behind some of the bread and a couple of the roasties.

As a big fan of Toby Carvery and pigs in blankets, I had high expectations for the Super Pig and I'm relieved to say I enjoyed every last mouthful, even if it did leave me feeling somewhat of a super pig myself. It's quite literally Christmas in a bun, and I don't really think you can ask for much more for a modest £7.49.

The foot-long Festive Super Pig will be available in Toby Carvery restaurants right up until December 31.