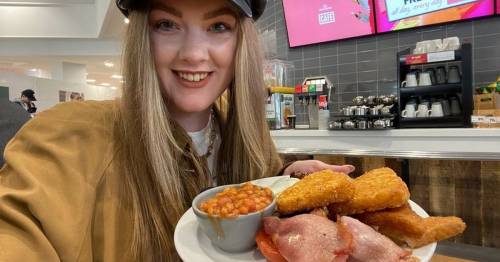 ‘I tried fry ups at Morrisons, Tesco and Asda cafes – there were numerous mishaps’

It's been a staple food for us Brits, but it doesn't always go without the occasional hiccup – especially when you try and get it on the cheap.

And the haunt that often gets the most mixed reviews is the food served at supermarket cafes, as the Manchester Evening News' Bethan Shufflebotham was to find out.

Bethan decided to make it her mission to discover which supermarket had the best pitstop fry up, tasting offerings from Morrisons, Asda and Tesco.

And the end result left her stunned having just found that one – and maybe a half – could serve a runny egg yolk between them.

And it wasn't the only mishap, from a rock hard black pudding to a three-mile drive to dine in. Here’s how Bethan's mission to find the best fry up turned out.

The café in my local Morrisons store is currently undergoing a revamp, though a sign outside reads ‘your new look Morrisons café is now open’.

Honestly, I’d be interested to see what it was like before, because, despite the addition of some touch screen pads to order on, the rest of the venue still seems pretty dated and reminiscent of an all inclusive breakfast bar at a cheap Spanish resort.

I quickly browsed a paper menu before ordering on a touch screen pad – something most of us are familiar with these days.

My first hiccup came when it asked for a table number and I didn’t have one, having not selected a table at which to sit yet.

I peeked around the corner and saw table five was free, so entered that. However, as I was dining alone, I was unable to ‘save’ a table, and ran the risk of someone sitting down at number five before I’d completed my order.

On the screen I ordered the ultimate breakfast, which features three sausages, two bacon rashers, two flat mushrooms, half a tomato, two slices of black pudding, two hash browns, Heinz baked beans and a slice of fried bread for £7.49.

Did Morrisons cafe's ultimate breakfast live up to its name?
(

When I clicked add to order, the screen attempted to upsell me some chips for an extra £1, so I clicked yes.

I was suffering from a bit of a sweet tooth, so ordered one of the fresh cakes on the menu too – a lemon meringue cake – and paid by card before sitting down.

I realised I hadn’t ordered a drink, so left my receipt on my table as I walked over to the self-serving Tropicana orange juice dispenser, and paid £1.99 for this at the till, sitting down for a second time.

When my food arrived, I discovered that I had no cutlery, so asked a member of staff where to find them, and they were on a separate counter across the room.

Again, I picked up my bag, phone and keys, grabbed some cutlery and sat back down to eat.

Before even cutting into the egg I could tell it was overdone, and that the beans had been sitting for a while, having developed that little film on the top, however, as someone who doesn’t particularly like sauce, I very much appreciated that these were served in a separate pot.

The bacon and sausage were both alright, but nothing to really write home about, while one of the two pieces of black pudding was as solid as a lump of coal. I genuinely think I could have used it as a firelighter.

Personally I found the hash browns to be too oniony, and the fried bread made an embarrassing amount of mess when I snapped it in half – though it did taste pretty good, and the chips were alright, though certainly not needed as the portion is quite large anyway.

When I’d finished I did remember about my cake, but there didn’t seem to be a member of staff present to ask about it, nor did I want to just stand up and take it from the counter seemingly without paying.

I waited five minutes but ended up abandoning the operation because I was feeling a bit exhausted at this point; I’ll satisfy my sugary lemon craving another time.

Later in the week I visited a Tesco café, which felt much more modern, bright and spacious.

Pink and blue cushioned chairs were tucked neatly under tables which were well spaced out and offered a relaxed atmosphere.

The breakfast was priced at a humble £4.90, boasting a pork sausage, bacon rasher, free range egg, two hash browns, roasted tomato, baked beans and white toast, which could be upgraded to sourdough for 85p, which I did.

Opting again for orange juice, which I believe to be the superior fry-up beverage, I felt like I was being robbed as a bottle of smooth Tropicana cost £2.15, especially when you can get a four pack in store for £3.

The price of the orange juice left Bethan feeling 'robbed'
(

The food was served pretty quickly with cutlery and a napkin, and I was thrilled to find a runny egg yolk to dunk my hash browns into.

The egg was perfectly round, so I suspect the kitchen has a handy gadget that helps them achieve this.

I have to say, while the sausage and bacon was nice, I’d have been more than happy to pay a bit extra for two sausages and two bacon rashers, which would have been a bit more substantial.

That said, what was on the plate was well cooked and tasty – the hash brown were an absolute delight, crisp, fluffy and delicious.

The sourdough came with a little bowl of butter to spread on, which had melted in the heat of the bacon, making it easier to spread, and a welcome carby addition to the meal.

Generally, my experience at the Tesco café was my favourite, having not needed to play a game of musical chairs before I could eat, and it was the most affordable of the bunch.

At the end of the week, I walked up to the Asda café counter to order an all day brunch, only to be told ‘Sorry, we can’t do the all day brunch as we’ve run out of sausages and bacon’. Solid start.

I hopped back in my car and drove three miles to the next nearest branch, hopeful that I could still enjoy a midday breakfast offering, and I was in luck.

Here I was able to order an all day brunch for £5.90, as well as an Oasis Citrus Punch as there was no other orange juice available.

Asda cafe’s sausages were more chip shop style than the rest, while the chips tasted like oven chips and were a bit dry. My local chippy offers far better.

Atmosphere was strained at times, mostly because the store was 'testing out their fire alarm' according to cafe staff, which meant a long, loud, screaming beep interrupted my meal three times.

However the bacon was good and one of the eggs saw a slight runny yolk, but not nearly as good as Tesco, and the other was totally cooked.

For me, Tesco won on price, atmosphere and quality, what was on the plate was great, I just wish there had been slightly more of it.

Morrisons for me provided the most stressful experience for the amount of times I had to get up.

While it was the biggest plate of food, it wasn’t amazing and the price was quite high for the quality.

Asda’s food was cheap and cheerful, but it simply couldn’t beat Tesco’s fry up despite the extra bacon and sausage. Though I can’t imagine I’ll be dining out after the weekly shop any time soon, either way.