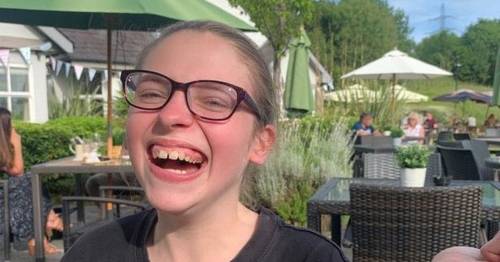 A mum who first thought her baby was clumsy now has to watch her daughter 'deteriorate every day'.

Nicola Morris, from Moorside, Oldham, first started noticing her little girl Imogen was unsteady on her feet and tumbling over a lot when she was two years old.

After years of desperately searching for answers and multiple healthcare appointments, she was eventually handed the news that Imogen, now 15, has an extremely rare genetic disorder that affects the nervous system.

Imogen has a life-limiting disorder which means her mum has to support her to walk, eat and bathe and results in her movement and abilities worsening over time.

She could even lose her sight, the Manchester Evening News reports.

Imogen's mum has to help her walk, eat and bathe
(

As Nicola battles with mothering three children and trying to support the needs of her daughter, she is hoping to travel across to the Netherlands to see specialists who are researching potential treatments for children with the disorder.

It is a painful experience that sees Nicola watch her own daughter lose her independence day by day.

Speaking to the MEN , single mum Nicola said: "I always noticed things were different about Imogen, even from being as young as two or three. Her balance was poor, she was clumsy on her feet and would fall over all the time.

"At first we just thought it was her being young, and she was my first child so I couldn't compare it to anything, but I started noticing she was getting worse.

"She was referred to physio and occupational therapy, but then in year two she couldn't walk without holding onto things, couldn't step through doors and was becoming less steady on her feet. I pushed for her to be seen by someone and she was diagnosed with dyspraxia and autism.

"I saw her regress more, she started having tremors and spasms, so I pushed for another referral to see a neurologist. She was referred for an MRI scan and it came back she had white matter on her brain. Genetics testing confirmed to us in 2015 that she had Leukodystrophy."

Imogen's rare form of the disease, 4H Leukodystrophy, is incurable. She has the mutation POLR3B.

4H leukodystrophy is inherited, and only occurs when both parents carry the genetic mutation, but generally have no symptoms themselves.

People living with the condition often have motor problems, such as stiffness of the muscles and joints or with balance and their coordination.

Now a teenager, Imogen is unable to even walk to the top of the street to meet friends or eat normal foods that haven't been softened. Daily tasks such as showering and going up the stairs are becoming more unbearable for her.

"We all carry faulty genes and it turns out me and Imogen's dad both carried it and passed it on to her. We were virtually genetically incompatible," Nicola explained.

"We were told there was no cure and that she could possibly lose her vision, her speech and her mobility. All the nerves sending signal to her brain for movement and the muscles in her body are not going through.

"Now she struggles with her eating and needs to have soft foods because she chokes easily, and I have seen that get much worse. She struggles to speak too, almost like her tongue is too big for her mouth.

"It is frustrating because we can't be given any answers and I know there is nothing I can do. There are mornings when she can't even walk or get around anymore. It is so stressful and heartbreaking watching your child deteriorate every day in front of your eyes.

"She is a teenage girl who has no independence. She can't go out for walks or do normal things like bathe herself, her life is just becoming so limited. She is soon going to be 16 and going to prom and just can't do things any other teenager could."

Nicola's friend has taken up fundraising efforts, in a bid to see the family visit the Netherlands to see a specialist doctor for more clarity – at a cost of over £300 per appointment. She is also raising money for home developments to make Imogen's life easier, including a wet room so she can wash herself, a wheelchair and a stairlift, as well as a support dog.

Nicola, who documents Imogen's journey on a Facebook page says Occupational Therapy with Oldham Council carried out an inspection in the past, but that her daughter did not meet requirements for a wheelchair. She wants to be able to go out as a family with her other two children Gracie, six, and Erin, eight.

A joint spokesperson for Oldham Council and Oldham Care Organisation, said: “The health and wellbeing of our residents is vitally important to us and we will do everything we can to support those who need our help. We conduct thorough assessments to establish the needs of every individual and we make recommendations for equipment and adaptations in line with the relevant guidelines and legislation.

"Our Community Occupational Therapy team and Paediatric Physiotherapy team are in close contact with the family and they will keep working with them to ensure they get the support they both need and deserve.”

Nicola added: "We need a chair so we can go out easier as a family together. A wet room so she is able to bathe independently, as she wants so badly to be able to do things herself.

"It is so hard as a single parent with no support. She can't go out and do anything as she is just too vulnerable, but I can only give her so much. All the while I am chasing for help, her life is getting worse."