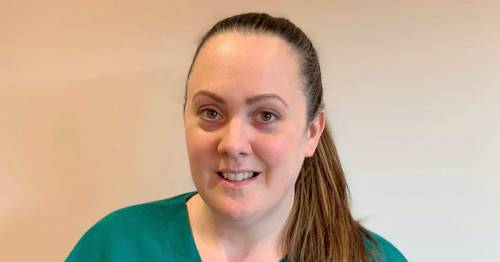 NHS staff have blasted a 3% pay deal that could become another real-terms cut for our frontline heroes.

Unions are consulting on possible industrial action over the deal, which follows a decade of below-inflation rises.

Pat Cullen, of the Royal College of Nursing, said staff “will not take this lying down”.

Exhausted medics faced a fresh insult today as the Government announced a “paltry” 3% pay rise after a year of extraordinary toil and sacrifice.

As hospital admissions with Covid soared to their highest level since February, NHS staff were forced to wait for a delayed announcement on the deal before the blow was finally dellivered.

Frontline staff had demanded a decent pay increase after a decade of below-inflation deals which has left many around 15% worse off in real terms.

Inflation is at 2.5% and the Consumer Price Index measure – the average cost of goods and services – is expected to rise by up to 4% by the end of the year.

What is your view on the 3% pay rise? Have your say in the comment section 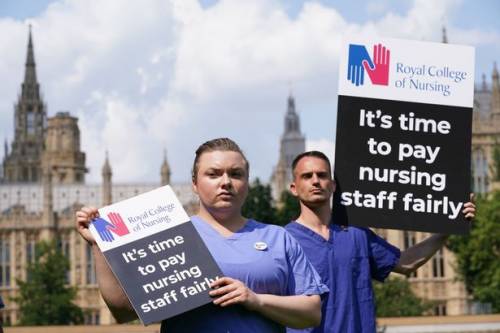 Nurses outside the Royal College of Nursing in London make their feelings clear following the Government's announcement
(Image: PA)

Rachel Harrison of the GMB said: “NHS staff are on their knees exhausted, fatigued and anxious as we look set to enter another wave of the Covid pandemic.

“Staff morale is rock bottom. Hospitals and ambulance services are operating under extreme pressures due to rising demand and staffing shortages.

“This was the opportunity for Government to turn their clapping in to genuine recognition. Their response is paltry. They have failed spectacularly.” 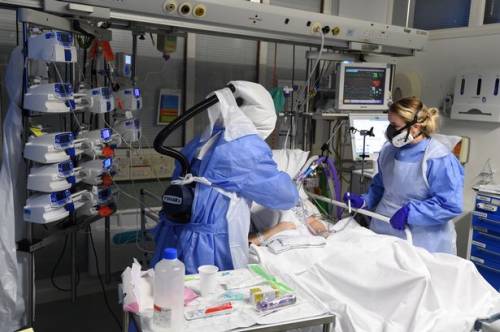 “When the Treasury expects inflation to be 3.7%, ministers are knowingly cutting pay for an experienced nurse by over £200 in real terms.

“Hospitals and other parts of the NHS are struggling to recruit nurses and healthcare support workers.

“The Government has been warned that many more are on the verge of leaving. With today’s decision, ministers have made it even harder to provide safe care to patients.

“Nursing staff will remain dignified in responding to what will be a bitter blow to many.

“But the profession will not take this lying down.”

“The Government has failed to show staff just how valued they are to us all.

“There’s a risk many may not stay around to see the NHS through the pandemic and the clearing of the Covid backlog.”

The 3% pay rise is for most NHS staff including nurses, paramedics, consultants, dentists and salaried GPs and is backdated to April.

It does not include doctors and dentists in training who have their own separate contracts.

The devolved government in Scotland has provided NHS staff a 4% rise backdated to December 2020.

The announcement came a day after a petition signed by 800,000 people was delivered to Downing Street demanding a 15% rise.

“Unite will be consulting widely with our 100,000 members in the health service in the coming days and weeks as to the next steps which will include a consultative ballot on industrial action.”

The announcement came as hospital admissions in England of Covid patients climbed to the highest level for nearly five months, with 752 reported on Monday – up 21% on the previous week.

Medics fear hospitalisations could rise to levels seen in previous waves when the NHS came close to being overwhelmed.

The NHS also has a record 5.3 million treatment backlog that is expected to increase.

Pay has fallen behind by 17% in real terms over the last decade for nurses, physiotherapists, midwives and radiographers at the top of NHS pay band 5. 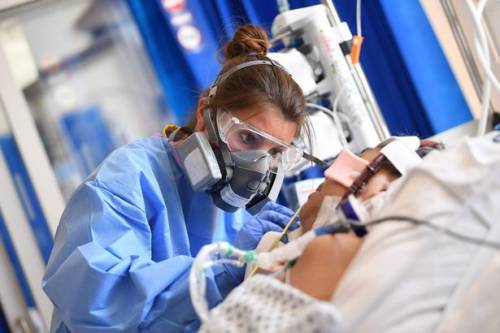 NHS heroes have been right on the frontline, risking their own lives
(Image: POOL/AFP via Getty Images)

Last year MPs got an inflation-busting 3.1% pay rise, the latest of eight in 10 years, bringing their basic annual salary to almost £82,000

Boris Johnson, who earns £150,000 at No10, was last year reported to have been “worried about money” after his earnings halved when he became Prime Minister.

The Government had initially proposed a1% pay rise to the NHS Pay Review Body, which came back with a recommendation of 3% in June.

The deal was due to be announced in Parliament at 1.30pm today but was no agreement could be reached in time.

Then at 6pm the Government finally rushed out a statement confirming the 3% deal.

“We asked the independent pay review bodies for their recommendations and I’m pleased to accept them in full.”

Boris Johnson said: “Our NHS staff have been heroic throughout the pandemic, providing care and saving lives.

“To recognise the extraordinary contribution they have made they are receiving a 3% pay rise this year.”

The Government said an average nurse will earn £1,000 extra a year while many porters and cleaners will receive around £540 more.

Danny Mortimer of NHS Confederation said: “This is a positive outcome for NHS staff .”

The Government is freezing pay for many in the public sector including police which means they will see real terms pay cut.

TUC General Secretary Frances O’Grady said: “Every key worker deserves a decent standard of living for their family but too often their hard work does not pay.

Anger and despair of hero staff

NHS workers told of their fury at the pay award.

Nurse Jodie Elliot , 31, who works on a paediatric ward in a London hospital, told the Mirror: “That’s not enough as far as we’re concerned.

“In real terms the Government could be giving me another pay cut. I’ve been doing this for around 10 years and I’ve literally never known a decent pay packet.

“The NHS has been doing its damndest to keep things going and we are now working at over 100% capacity.”

“We desperately need pay restoration to enable us to recruit and retain staff.

“A further pay cut means the NHS will continue to be increasingly dangerous. We won’t give up fighting for what we are owed.”

Charmaine Bannister , a nurse from Cambridgeshire on £25,000 a year, said: “There’s always that last week where it gets a bit hairy working out if you can afford food or if there are more bills coming out.”

Lesley Knights , a staff nurse from Newcastle who works part-time, earning around £30,000 pro-rata, said: “The Government has not rewarded us for our dedication and loyalty.” 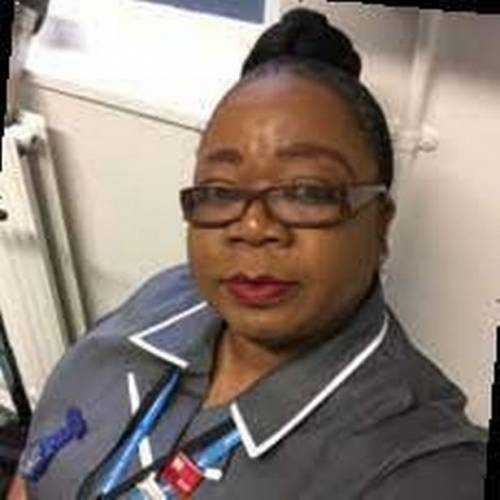 She said: “This is going to make us more angry and confidence is going to go in the Government.

“The contribution from nurses and health workers during the pandemic has been enormous.

“People have died. My colleagues died. This is really discouraging news.” 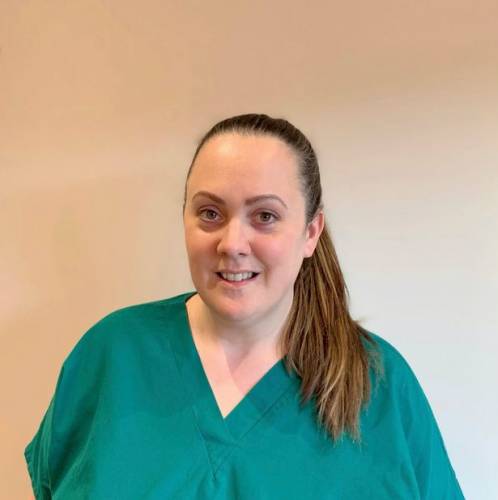 Caroline Nicholson is an operating department practitioner in North West England. She is married with a son and earns around £30,000.

She said: “Morale is at an all-time low, staff are exhausted and burnt out.

“Not getting a proper rise is the last straw.”

Throughout the pandemic NHS workers have gone above and beyond the call of duty.

They served with professionalism despite long hours under intense pressure facing staff shortages while also not having proper protective kit.

We should never forget that more than 1,500 health workers have lost their lives to Covid-19 so far.

This heroic effort by these saints in scrubs deserved more than the 3% pay rise offered by the Government which could be a pay cut in real terms.

If Boris Johnson were truly grateful to those who saved his life he would have given NHS workers in England the pay rise they deserve.

Previous : Pleas for double-jabbed supermarket workers to be exempt from pings as shelves go bare
Next : Labour demands probe into whether Nadhim Zahawi broke code over £100million empire