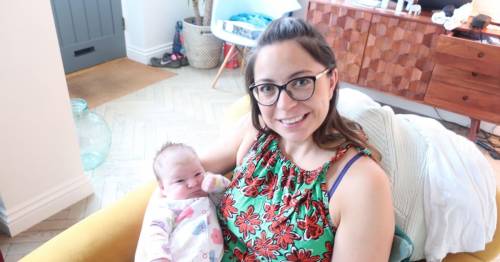 ‘I had awful thoughts of harming my baby. I didn’t want to be near knives’

Sam Murrell describes an intense bond with her three-year-old daughter, saying she couldn’t imagine life without her. Yet in the weeks following Luna’s birth, she was plagued by thoughts of harming her – fuelling an anxiety so intense she feared her child would be taken away.

Walking into the kitchen, Sam experienced horrifying, unwanted thoughts of injuring Luna. Just seeing large knives on the draining board was enough to trigger disturbing thoughts of deliberately hurting her baby, a strikingly honest admission for any parent.

Recalling the memory of entering her kitchen in those raw, early weeks, Sam, 39, says: “I would think, ‘I can’t be in here, I can’t be near those knives. What if I had some sort of random, uncontrollable rage and hurt her?’”

These tormenting thoughts, which made Sam cry, became “more frequent and louder” and came with powerful bodily sensations such as a tight chest and racing heart.

“Then I would think, ‘How could I even have that thought?’ I was so horrified that it could even come into my head. And then as they became more frequent, I started to attach meaning to the thoughts.

“I believed I was a bad mum and there was something wrong with me.”

Yet the latest research shows that around one in two mothers experience disturbing, unwanted impulses or urges to harm their babies.

As a perinatal clinical psychologist, I know how common intrusive thoughts are in new mothers – and that it doesn’t mean they are bad or failing.

Sam had intrusive thoughts of harming her baby
(

Nearly every single woman reports intrusive thoughts of accidental harm befalling their baby. Sam experienced these too: graphic images of dropping Luna down the stairs, of her daughter suffocating, and imagining knocking her “tiny, vulnerable baby” against a steel pole.

“It just felt that danger was then around me all the time,” Sam, from Loughton, Essex, says. Intrusive thoughts map on to our current concerns and real fears as new parents.

Mums report envisioning throwing their baby out of a window, drowning them in the bath or pushing the pram into oncoming traffic. While intrusive images are more frequently experienced by women, dads get them too.

Given their taboo nature, these upsetting thoughts, images and urges evoke intense shame, horror and guilt. Women often feel alone in their thoughts – fearful that sharing them could risk involvement from social services. As Sam described, many interpret their vivid visions as a sign they are a bad or mad mum.

“It was almost like I had to surrender to the thoughts because the shame felt so heavy and because of the judgment I put on myself. It was as if someone was bombarding me with these thoughts.”

However, the very fact mums feel ashamed or horrified is a strong sign that they’re not going to hurt their baby.

In the absence of other risk factors, research confirms that women who experience intrusive thoughts about harming their babies do not pose a threat to them.

Luna is now three and Sam is a coach
(

Sam said she had to 'surrender to the thoughts'
(

It is important to distinguish unwanted, intrusive thoughts from postpartum psychosis, a severe but rare condition affecting around one in 1,000 women. Signs of postpartum psychosis include mania, hallucinations and delusions – where women believe things that aren’t true, such as believing their baby is evil. In contrast, intrusive thoughts don’t sit comfortably with women, inducing feelings of horror, fear and disgust.

These attention-grabbing thoughts are anxiety-driven – meaning they’re not indicative of risk in themselves – and are more likely to occur amid high stress and isolation.

So it’s understandable that new mothers suffer with these scary thoughts, which peak in the chaos of those early weeks, while grappling with their new role.

Her unwanted thoughts flew in the face of every idea she had of a “good” mother. “That was a big, big part of it. A good mother would never have these thoughts,” she says.

“I felt that I was failing and was finding it so hard, and [my thoughts] jumbled up and exacerbated that. I’d think, ‘You have these horrible thoughts, so that proves you’re a bad mother’.”

It’s the meaning that we draw from these upsetting visions that gives them power. I call this the policing effect of aspiring to be a Supermum. This relates to the “perfect” mother myth, which places huge pressure on women to cope, maintain control, and be a “good” mum.

The powerful Supermum myth, internalised by women from an early age, creates the idea that experiencing any negative feelings means you are somehow failing. Interpreting the thoughts to mean you’re bad or mad – or that you might act on them – can increase their frequency and severity, making them harder to dismiss. For some, this can lead to obsessive compulsive disorder (OCD), which can arise or intensify in pregnancy.

The Canadian study, led by DrNichole Fairbrother, found that 17 per cent of participants were diagnosed with OCD. Efforts to control obsessive thoughts relating to risk to the baby include repeated checking, fighting the thoughts or avoiding certain tasks that trigger them.

“Many parents suffer in silence as they believe they will be judged and seen as a bad or unfit carer,” she explains.

“This is not the case. When parents open up and talk about their intrusive thoughts it can help to rationalise and disempowerthem.”

For women who are struggling with their unwanted thoughts, talking therapies such as cognitive behavioural therapy (CBT), accessible on the NHS, can support parents. Medication can also help in severe cases.

Shame initially prevented Sam from sharing her thoughts with anyone except her husband. When Luna was three months old, she accessed a CBT psychologist via her GP, who reassured her that her thoughts were common. She saw a private counsellor 15 months later.

“It was the biggest relief to tell her. It was unbelievable,” she says.

Sam, whose experience motivated her to set up her own coaching practice to support mums, Mothers’ Hood, learned ways to distance herself from her thoughts.

Previous : ‘Regretful’ Prince William was ‘invisible man’ at State Opening of Parliament, says expert
Next : Surviving husband of bigamist ‘Black Widow’ murderer says she must not be freed