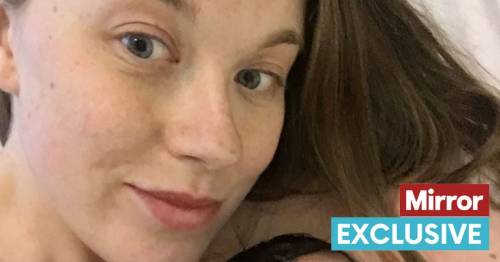 A first-time mum has said she was outraged after hearing Prime Minister Boris Johnson was "nursing a hangover" the day she was forced to give birth alone in a dark hospital room.

Rosa Maryon had to leave her partner at the door of the maternity suite, before being placed alone in a dark room by a stretched midwife for more than three hours.

The 26-year-old said she was hysterical, left without support or pain relief as the overworked nursing team looked after other patients.

She was alone for three and a half hours while in labour, as she went from 1cm dilated to 9cm, with no idea when a midwife would next check on her.

It was May 21, 2020 when her baby girl Esme was born, the day after Boris had a Bring Your Own Booze party at Downing Street with more than 100 people.

Rosa was left alone while in labour
(

Speaking to the Mirror, Rosa who is a PHD student and lecturer at the University of the West of England, said: "I was terrified and by myself and they were all nursing a hangover.

"It really makes me angry.

"There are so many people who did their bit, we stood outside a church for a funeral of a 13-year-old when only a few mourners were allowed inside, I went through a tough labour alone.

"Every single person made huge sacrifices, we saw it as the right thing to do, it was like a national effort, and they were partying and thinking we are all mugs."

Rosa had been dropped at the doors of Heath Hospital in Cardiff by her child's father Fabian, as they had been told he would only be allowed in during "active labour".

She had already attended scans and midwife appointments alone, but was devastated to learn she would not have any emotional support during the earlier stages of labour.

Rosa added: "I was having contractions every 30 seconds and when the midwife came back to check on me I was 9cm dilated and she said to call my partner."

Esme's dad Fabian managed to race to the hospital to see his daughter arrive, but only got 60 minutes inside the hospital before leaving Rosa and Esme alone again.

She added: "I went through 98% of my labour with no pain relief, no partner and no support."

Rosa said that she feels so scarred by her birthing experience she said she would need counselling before even considering having another child.

"You need an advocate and emotional support, and I didn't get that.

"You do wonder if Carrie [Boris Johnson's wife] was alone when she gave birth."

Previous : Illinois judge disparaged lawyer in comments caught on video
Next : Man given just six months to live denied full sick benefits because he could get dressed