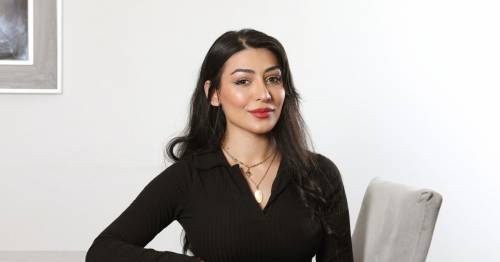 When she was just four years old, Roza Kurdo risked her life crossing Europe by land and sea as her family fled the brutal regime of Saddam Hussein.

Alongside her mum, she escaped savage mass killings in Iraqi Kurdistan and sought a better life in Britain.

And the former refugee has embraced her new life in the UK. Now 25, she is working as a nurse in Harley Street – and is also hoping to be crowned Miss England 2022.

But Roza admits she is troubled by the current political landscape and has called for Britain to be more welcoming to those fleeing persecution, as she once had to.

She describes the latest Government plans to send refugees to Rwanda as “horrible”.

Roza started her perilous journey in 2001, two years before the Iraq war that finally saw Saddam toppled as the country’s president.

She explains that the problems in the region dated back to the Al Anfal genocide in 1988, when Saddam’s forces killed tens of thousands of Kurdish people in northern Iraq.

Her parents had met in a refugee camp across the border in Iran, after being displaced as teenagers. Roza said: “My people, and my parents, suffered greatly during that time, escaping Saddam’s deplorable regime. Despite the horrors, they fell in love.

“Even when the worst of the violence and conflict was over, the country was still broken – children would starve, the economy was broken and people would go missing.”

Her dad had escaped the country in 1997 when Roza was still a baby. She said: “My mother and I followed about four years later. We came to England the only way we could. Boat crossings and terrifying lorry journeys.”

Now British citizens, the family have lived in Plymouth for 18 years – although Roza has had to move to Ilford, East London, for work.

Roza, pictured as a six-year old girl, with her mum in Iraq
(

Recalling their escape, she told how they nearly died travelling from Kurdistan into Turkey when the lorry they were in crashed.

Roza said: “The driver was celebrating after getting past Customs – I think he’d got drunk. It was a treacherous place.

“The lorry tumbled five times down a hill. A lot of people lost their lives. Others were unconscious, there was blood everywhere. We survived.

“We were in a secret compartment between the driver and the cargo hold, all crammed in there. If we’d been in the main part we wouldn’t have survived.”

Roza told how the survivors ran into the forest before the police arrived.

She said: “We kept running and found a petrol station. It was owned by a Kurdish Turk who saw the state we were in.

“It was common back then for Kurdish people to help those fleeing Iraq to Turkey.

“He helped us, cleaned us up. He was a kind man – he paid for our coach tickets to Ankara so we could carry on.”

Roza, aged 4, before escaping her country to come to Britain
(

She told how they then crossed the Mediterranean from Turkey to Greece – nearly drowning on the way.

Roza added: “Turkish police in a boat were shooting at us. I’ll never forget the terror. Another family was with us in the hull – they had two daughters. We’re still good friends – their daughters are both now medical students.

“The men pleaded with the police to stop shooting because there were women and children aboard. In desperation, the father of the other family held his elder daughter above his head, screaming in Kurdish, ‘Don’t shoot, there are children here, please don’t shoot’.

After crossing Europe they made the final part of the journey to the UK in the back of a lorry.

Criticising the proposed Government policy of sending refugees to Africa, she said: “Sending people to Rwanda – that would be horrible. We were in fear of being sent to a detention centre and being put on the first plane home. As a child that was my biggest dread – being sent back to live in constant fear.”

Roza explained how her parents had arrived in the UK not knowing English and struggling to communicate.

She said: “We came here with nothing – now we are law graduates, healthcare workers and businessmen.

“All we have done is give back to this country which welcomed us, and learned to love British culture. I think the Government will do a disservice by turning away these brave people who come here fleeing death and persecution.

She is hoping to become the next Miss England

“They should be welcomed to a loving country, be given an opportunity.”

Roza told how she had been invited to speak at a conference in Parliament in 2018 about the plight of Kurdish refugees.

She said: “It was to discuss how the rights of the Kurdish people have been infringed for as long as modern history can tell. I’m proud of my Kurdish origins, and I’m proud to be living in Britain.”

After entering Miss England she explained: “I’m entering not just to be seen, but also heard. I would like to use the platform to shine a light on the tragedies which befall the Kurdish people.”

Angie Beasley, director of Miss England, said: “It’s extra heart-warming to welcome Roza and anyone like her who has suffered much more hardship than the average person. We sincerely hope she enjoys her time in the contest.”

To vote for Roza, download the free Miss England app.

Previous : Vladimir Putin warns Finland joining NATO is a ‘mistake’ and will be ‘security threat’ – World News
Next : Lord Patel admits some at Yorkshire believe “nothing was wrong” despite racism scandal