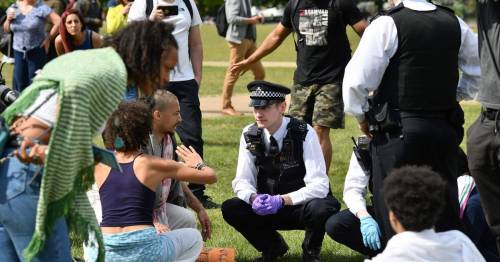 Hundreds of fines for breaking Covid laws were dished out by police during the same week of the Downing Street garden party.

No 10 was plunged into fresh chaos when fresh allegations emerged that a drinks party was held in the Downing Street garden on May 20, 2020 – during England's first lockdown.

Scotland Yard has said it is in contact with the Cabinet Office about the garden party allegations.

There were 807 fixed penalty notices issued for breaches of Covid rules in England and Wales in the week between May 15 and May 21 2020, according to the latest data from the National Police Chiefs' Council shows.

Covid-19 rules had changed a week before the party as the Government warned it was considering tougher enforcement for anyone breaking the rules.

On May 13, 2020 lockdown fines increased to £100 and could be handed out to anyone who was believed to breaching the restrictions on movement as the country grappled with the pandemic.

Police officers disperse people who are gathered in Hyde Park in London on May 16, 2020
(

At the same time, the Government published a 50-page document saying the higher fines "reflect the increased risk to others of breaking the rules as people are returning to work and school".

The Covid rules in force at the time still required people to have a reasonable excuse to leave their homes.

However, people were allowed to meet one other person outside their own household at one time in a public space for exercise.

Government ministers had urged people not to visit relatives and friends in their own homes or gardens.

Yesterday, a leaked email invite for the garden party from Martin Reynolds, the Prime Minister's principal private secretary, was published by ITV.

It read: "Hi all, after what has been an incredibly busy period we thought it would be nice to make the most of the lovely weather and have some socially distanced drinks in the No 10 garden this evening.

Multiple reports have said Boris Johnson and his wife Carrie also attended the event, which took place when outdoor gatherings were banned under Covid rules.

Asked if Mr Johnson followed Covid rules at all times, the PM's official spokesman said: “I don’t have anything to add beyond that the Prime Minister’s made that clear previously.

"I just point you to his previous words.”

Previous : Mum who named her son Lucifer says she has been slammed by online trolls
Next : Zak Crawley hoping Ashes innings is springboard after learning from 2021 struggles