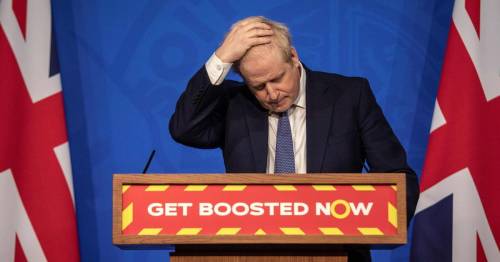 Britons were quick to disparage and denigrate Boris Johnson's apology after he came clean about attending a Downing Street garden party held during the height of lockdown.

The Prime Minister was branded him a "hypocrite and liar" on Twitter after he tried to avoid further backlash by claiming he thought it was a work event.

Many were outraged by Mr Johnson's so-called explanation after he told MPs how he went outside to thank staff and admitted "with hindsight, I should have sent them back indoors."

Calls continue for him to resign following the May 2020 scandal which took place when the country was living under Covid curbs.

Ruth Scammell tweeted: "So Boris thought it was a work event? If that was true then why not suggest a Zoom call like everyone else?

"And now we have an inquiry funded by the taxpayer to establish whether or not he was having a party in his back garden?! Ridiculous."

@CynicalCall quipped: "Since when is a bring your own bottle p*** up a 'works event?'

Many shared GIFs to express their disgust at the PM's apology
(

"Shameful Johnson is a lying hypocrite. He must resign. Hancock resigned, time for U-turn Boris to go too."

Mohammad Asif Manaf commented: "So the excuse from Boris Johnson at the PMQs is that he didn’t believe he was attending a booze party but instead a 'work event'.

"This deception is inherently false and Boris couldn’t even take the step of acceptance of liability. Ridiculous."

Hashtags including #BorisJohnsonMustGo and #BorisResign were trending on Twitter following the Downing Street party revelation which is the latest in a string of political hypocrisies.

However, others took a more level headed approach to Mr Johnson's apology with some appearing unsurprised by another let down from Parliament.

"It's mad how much people are getting riled up about some party, it just feels like point-scoring and shouting for the sake of it," @Philm2tic tweeted.

"By all means, be angry about Boris and mates being hypocrites and showing disdain for the wellbeing of us all, but that's kind of their entire thing."

Jane Gail said: "People tearing Boris apart, but how many folks flocked to the beaches here in Bournemouth and Lulworth completely flouting lockdown guidelines? We were swamped. Bunch of hypocrites."

It comes after Mr Johnson apologised in a statement ahead of the meeting on Wednesday.

He said: "I want to apologise. I know that millions of people across this country have made extraordinary sacrifices over the last 18 months.

Other shared images from iconic films to mock the prime minister
(

"I know the anguish they have been through, unable to mourn their relatives, unable to live their lives as they want or to do the things they love."

He continued: "I know the rage they feel with me and with the Government I lead when they think in Downing Street itself the rules are not being properly followed by the people who make the rules."

Social media erupted into a hive of memes mocking the PM, with one showing Ant and Dec in a fit of giggles – alluding to their regular jibes at the Government
(

Many on the Twittersphere commended Sir Keir for "destroying the PM" with his comments.

One person said: "I think it's safe to say that Keir Starmer utterly destroyed Boris Johnson today and we are now looking at the dying members of the Johnson premiership."

@buhbyefelicias commented: "I’m not exactly a fan of Keir Starmer but he’s completely right. Boris is only apologetic because he’s been caught out in his lies. Time to go, BoJo. Disgraceful conduct."

Meanwhile, @stokiein challenged: "You don’t want him to resign, he is the only outside chance you have of getting a Labour Government. You should resign and give Labour a fighting chance."