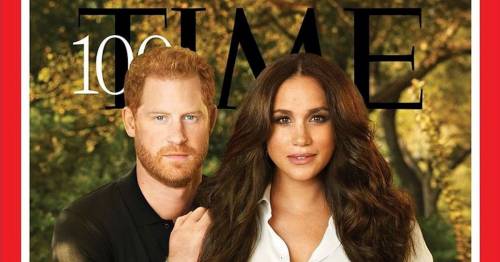 Prince Harry and Meghan Markle have made this year's list of TIME magazine's most 100 influential people.

Their inclusion on the list has been marked with a striking new picture of the couple, with Meghan dressed in all white and Harry contrasting in all black.

The magazine praised the pair for having "compassion for the people they don't know", adding: "They don't just opine. They run towards the struggle."

Harry and Meghan, who say they are "humbled" to be in the list, appear in the new issue of the magazine alongside a short profile of them by chef José Andrés.

José is a founder of the World Central Kitchen, one of the charities the Sussexes Archewell Foundation has been supporting.

He tells TIME: "Springing into action is not the easy choice for a young duke and duchess who have been blessed through birth and talent, and burned by fame. It would be much safer to enjoy their good fortune and stay silent.

As well as being part of the list, Harry and Meghan have also written a piece for the publication praising Director-General of the World Trade Organisation, Dr. Ngozi Okonjo-Iweala, who is also named one of the 100 most influential people of 2021.

In a statement on their Archewell website, they said: "Prince Harry and Meghan, The Duke and Duchess of Sussex, are not only humbled to be part of this year’s TIME 100 through the words of friend and partner José Andres, but to also write in praise of Dr. Ngozi Okonjo-Iweala for the publication’s annual list of Most Influential People.

Since becoming the Director-General of the World Trade Organization in March, Okonjo-Iweala has astutely been hailed for the groundbreaking nature of her appointment to the role; the first woman and the first African to assume the position.

"What further sets her apart, and makes her leadership all the more trailblazing, is her ability to see the COVID-19 pandemic as a crisis with significant implications for both health and economic security. To tackle it, she has encouraged governments, trade organizations, and individuals to think of vaccine distribution and equity as inextricable from economic recovery."

They continued: "The Duke and Duchess are honoured to be Ngozi’s partner in pursuing that goal [vaccine equity] and are proud to be listed alongside her on this year’s TIME 100."

This isn't the first time that Harry and Meghan have made the 100 most influential people list in the publication.

They also were part of it last year, and used a video clip to speak out about the US Election.

Meghan said: "We're six weeks out from the election, and today is Voter Registration Day. Every four years, we're told, 'This is the most important election of our lifetime.' But this one is. When we vote, our values are put into action, and our voices are heard."

The clip sparked a heated debate as royals normal avoid speaking out about politics.

Meanwhile, in 2018, Meghan herself made the list, just after her royal wedding to Harry, and her friend Priyanka Chopra penned a moving tribute.

She wrote: "Somewhere among biryani, poutine and endless conversations, I realized just how deeply Meghan Markle cares for the world. With her, what you see is real, and what you get is a relatable young woman with her heart and mind in the right place. Her compassion, evident in the causes she supports, and her drive to break down stereotypes—obvious in her actions—will connect her to a generation in much need of kindness.

"This ever-smiling, strong free spirit found her prince, fell in love and in turn made a cynical world believe in fairy tales again. But more than anything else, Meghan is an important influencer in a world that needs strong public figures to respect and look up to. People the world can be inspired by. Meghan, standing shoulder to shoulder with Harry, will be a princess for the people.

"Love always, my friend. Live happily ever after.