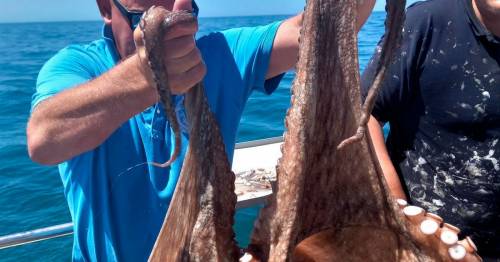 A fishing enthusiast was shocked to discover he'd caught an enormous common octopus "with suckers as big as 50 pence pieces".

Chris Rushton pulled in the creature, which weighed a whopping 18lbs, while enjoying a spot of fishing off the south-west coast of Jersey.

The Wiltshire resident, who was visiting the island on a work trip and had a day off, was on board the charter vessel Anna III on Tuesday when the catch was made, as reported in the Jersey Evening Post.

After taking a few photos of the impressive beast, Chris returned the octopus safely to the sea.

Paul Chambers, head of the government’s Marine Resources Department, said it was a rare example of a common octopus nearing maximum size.

Chris, who also fishes competitively, told the Jersey Evening Post: "I had a day off and decided to go fishing, which I do a lot of back home. I didn’t think it was an octopus when we first hooked it and when it came up out of the water everyone went “wow”.

"Including the legs, it was a good couple of metres. We weighed him, took a quick picture and returned him safely to the water, where he dived back down."

Anna III’s skipper, Tony Heart, said the suckers on the octopus were as big as 50 pence pieces.

He added the crew were all very surprised by the size of the animal, adding that in 30 years they've been charter fishing the team have only seen one other octopus which weighed about a pound.

Paul said that that there was once an abundance of octopus in the waters around Jersey, and people were catching them by the tonne. However the freezing winter of 1962/63 massively cut the population and now there are only the odd sightings of the smaller curled octopus, and even less of the common octopus.

He believes the octopus caught by Chris was around four times the weight of an average octopus picked up by Jersey's commercial fishing fleet each year.

"When we get this type of report, especially of one this size, the question is always whether it is the start of something,’ he said, adding that there was ‘no obvious sign’ the species would be returning to Island waters in large numbers."

Paul said octopuses have an extraordinary strength though are not dangerous to humans. They've historically caused problems with crabs, oysters and ormers because they can get into cracks and crevices.

Previous : Man dies after ‘getting into difficulty’ in park lake during UK heatwave
Next : Mum, 36, with ‘everything to live for’ found dead outside pub with hypothermia