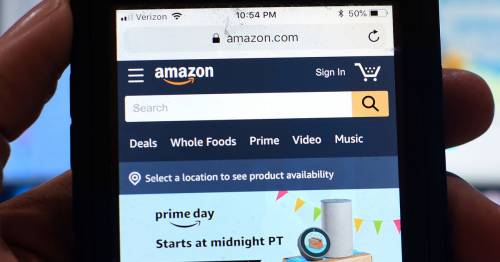 Websites for Boots, the National Lottery, PayPal eBay, Twitch, the Guardian, Financial Times, Independent and New York Times were among those down and giving error messages around 11am.

The UK Government website – gov.uk – was also not working, giving the error message "Error 503 Service Unavailable", though most websites appeared to be back online by 11.45am.

Visitors to the Guardian and several other sites received an error message stating "connection failure" or "Fastly error: unknown domain". 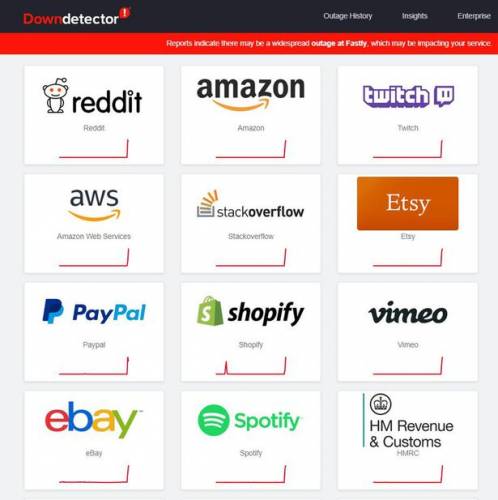 Downdetector users reported problems with these and other websites on Tuesday
(Image: PA)

The outage affected the use of emojis on Twitter.

What caused the outage?

The outage appears to have been sparked by an issue with a content delivery network (CDN), a system used to host websites and their content on the internet and serve it to users.

Fastly, one of the world’s major CDNs, has reported a major outage across its global network, which is believed to have caused the outage.

The company offers services such as speeding up loading times for websites, protect them from denial-of-service cyberattacks and helping them deal with bursts of traffic in order to stay online and stable.

The US-firm confirmed it had identified the problem and was working on a fix. 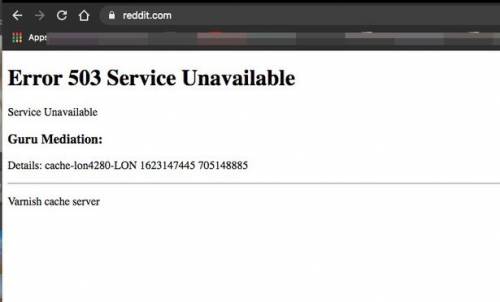 Several Brits sent tweets to the @GOVUK account to say they were unable to access or complete important services.

One wrote: "@GOVUK your website is down and I need to complete a passenger locator form ASAP."

The official GOV.UK Twitter account said: “We are aware of the issues with http://GOV.UK which means that users may not be able to access the site.

"This is a wider issue affecting a number of other non-government sites. We are investigating this as a matter of urgency.”

Downing Street said the Government was “urgently” investigating the outage, but it was too early to say if a hostile attack was to blame.

A spokesman for the Prime Minister did not rule out setting up an alternative route for people to book Covid tests if the problem continued.

He added: "It appears to be a wider issue, a global issue, and as you would expect Cabinet Office are investigating it as a matter of urgency.”

Asked if it could be a hostile attack, the spokesman said it was too early to draw conclusions but the outage “doesn’t appear to be targeted” to any one site. 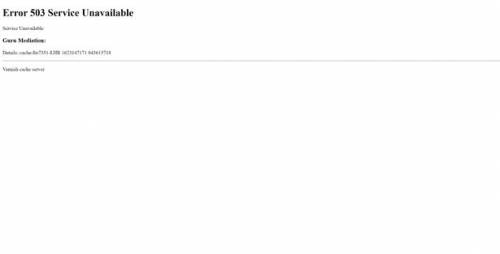 An error message on the Home Office's website
(Image: PA)

Asked if alternatives could be set up to let people secure Covid tests, the spokesman added: “We’re investigating this as a matter of urgency as you would expect and if mitigating measures are needed we would take those steps.”

Several punters said they were unable to add funds to their online National Lottery accounts, with one tweeting: "The page on your website and on the mobile App that allows you to add funds seems to have disappeared."

Alex Hern, the Guardian’s technology editor, tweeted that Fastly “has been identified as the cause of the problem”.

“The outage, which began shortly before 11am UK time, saw visitors to a vast array of sites receive error messages including ‘Error 503 Service Unavailable’ and a terse ‘connection failure’,” he tweeted.

The problem was probably due to a physical issue rather than software related, a software testing expert said.

“Given the nature of this kind of technology, it’s probably not a software issue,” said Adam Leon Smith, from BCS, The Chartered Institute for IT.

“It’s more likely to be a physical issue or a hardware failure somewhere.”

He added: “Some of the websites will have removed their dependency on Fastly in order to get themselves back online and so I think within a few hours things should be ticking along nicely again.”

Professor Mark Rodbert, visiting professor in computer science at the University of York and founder of cybersecurity firm Idax Software, said the incident showed the internet was too reliant on a small number of companies to stay online.

“It is remarkable that within ten minutes, one outage can send the world into chaos,” he said.

“This demonstrates the extent to which the move to the cloud has changed the things that companies need to protect.

“Whether the people inside a company or a supplier have made a mistake, or malicious perpetrators outside the perimeter have created the problem, it’s so important that we create firebreaks in the system so that if one company, or even just one well-connected employee, is compromised, the whole system isn’t brought to its knees.”

Jake Moore, cybersecurity specialist at ESET, said: “This highlights the importance and significance of these vast hosting companies and what they represent.

"Multiple areas will be significantly impacted as a result of this, along with an inevitable financial hit.”

Which websites were affected?

These are just some of the major websites affected by outages on Tuesday:

Previous : You can buy your very own beach near Dover for £1 – but it’s not for the faint-hearted
Next : Queen ‘had no choice’ but to accept Harry and Meghan’s baby name tribute, author claims