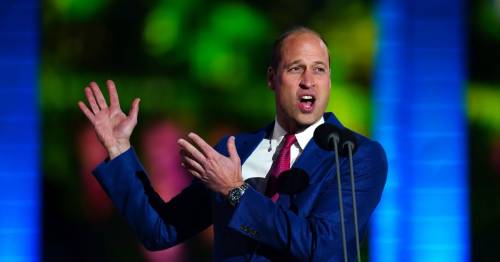 From the day he was born exactly 40 years ago today, Prince William has been second-in-line to the throne.

And since that day in 1982, not much has changed in that regard, with his grandmother the Queen still monarch, and his father Prince Charles still the heir.

However, with the Queen now aged 96 and starting to wind back from duties, William has become more and more relied upon by the royals.

In the past 10 years, he appears to have gone from a newlywed and a first-time dad to a full-time working royal, involved at the heart of family decision-making and responsible for helping to modernise the monarchy.

In fact, Mirror royal editor Russell Myers has referred to William as a "trusted lieutenant" of the Queen.

And as he celebrates his 40th birthday today, we look at how he's gone from a handsome prince to a king in training…

He was a newlywed, having only just wed wife Kate a year prior, and was working as an RAF search-and-rescue pilot.

Later, after the birth of his first child Prince George in 2013, he took on a full-time role as a pilot with the East Anglian Air Ambulance.

He stayed with the air ambulance until 2017, after the birth of Princess Charlotte, and was only then that he became a full-time working royal – shortly before he and Kate welcomed Prince Louis.

Harry and Meghan and the Sandringham Summit

William with his brother Prince Harry
(

One of the first times that William was brought to the fore when it came to royal family decision making was during Megxit.

After Prince Harry and Meghan Markle revealed they wanted to quit as senior royals, a summit at Sandringham was held in early 2020 to negotiate their exit from the UK.

Attending the summit was, of course, the Queen, Harry and Charles – and also William, who was involved in helping come to an arrangement for his brother.

Meanwhile, after Harry and Meghan gave their bombshell Oprah Winfrey interview, it was William who was first to speak out after the couple claimed a royal questioned how dark their children's skin would be.

After being asked if the royal family was racist, William spoke up saying : "We are very much not a racist family."

Prince William with his uncle Prince Andrew in 2017
(

Another scandal that the royals have recently had to deal with is the Prince Andrew saga.

The Duke of York stepped down from royal duties earlier this year after the Queen stripped him of his military titles and from using HRH status in the wake of a sex scandal.

Andrew denied the allegations against him and he later came to an out of court settlement with his accuser. The settlement is not an admission of guilt.

Now, it appears that William is taking more of a leading role in ensuring his uncle stays behind closed doors.

One insider told the Daily Mail that William has "strong views" on the Duke of York and believes that "his insistence in trying to cling on to a public role is highly dangerous for the institution".

Another source, a friend, added that William "would have cut [Andrew] loose a long time ago if it had been up to him".

It is believed a “family decision” was taken to limit the Duke of York’s appearance on Garter Day last week to a behind-the-scenes lunch and investiture ceremony.

Andrew was not seen in public during the event, one of the most colourful in the royal calendar, after William and is dad Prince Charles reportedly lobbied the Queen about his participation.

And according to the Evening Standard, William was "so alarmed" at the prospect of Andrew taking part in the event, that he made it clear that unless the Duke of York was dropped from taking part in public, he would not be taking part.

Stepping up in public

Prince Charles, the Duchess of Cornwall, and Prince William at the State Opening of Parliament in Westminster
(

But it's not just behind the scenes where William is stepping up, in the past few years he has been representing the Queen more and more.

And one of the most high-profile events he attended for the first time this year is the State Opening of Parliament, accompanying his dad Charles and stepmother Camilla.

During the event, William took his place in the procession behind the Imperial State Crown and sat at the side of Charles, who had the responsibility to read the Queen's speech after she pulled out of attending due to mobility issues.

And for the Mirror's royal editor Russell Myers, this showed how William is being primed already to be a future king and is learning the ropes with his dad.

He said: "William is emerging as a trusted lieutenant of the Queen, especially over the last couple of years.

"With the ongoing Sussex saga and the tawdry scandal surrounding his uncle Prince Andrew, William has been involved in top-level conversations regarding their futures, so it shows it is not just Charles but William also being prepared for kingship."

In addition, William also played a key role during the Queen's Platinum Jubilee celebrations and regularly holds investiture ceremonies on behalf of his grandmother.

When royal family members carry out any engagements or tours – they are representing the Queen.

And on some of the more diplomatically sensitive visits, it has been William – as well as Kate – chosen by his grandmother as the one to carry them out.

In 2018, he became the first-ever member of the family to travel to Israel and Palestine on official business and was praised for carrying out a successful trip on what could have been a diplomatic minefield.

Additionally, he and Kate were chosen to go on a tour of Pakistan in 2019 in what was described as one of their "most complex" tours to date.

And in May, he travelled to the United Arab Emirates to deliver condolences on behalf of Her Majesty and the royal family on the death of the country’s ruler Sheikh Khalifa bin Zayed Al Nahyan.

It was the first time second-in-line to the throne William had been asked to pass on the monarch’s condolences following the death of a foreign head of state.

Honours from the Queen

Another sign that the Queen implicitly trusts her grandson was when she awarded him a new role last year.

It was announced that William would be the Lord High Commissioner to the General Assembly of the Church of Scotland – the first time he had been given the honour.

The role saw him act on behalf of the Queen and "maintain the relationship between the State and the Church.

Looking to the future

Now William is 40 with his new role within the Firm cemented, what does the future hold?

Well, it emerged earlier this year that held crisis meetings on how to modernise the monarchy after stinging criticism of his Caribbean tour.

He told aides he is more determined than ever to update the institution as he attempts to respond to the backlash from a series of public relations blunders in the region.

Recently there has been much speculation about what the monarchy could be like when William is in charge with wife Kate, and it's already been dubbed the "Cambridge Way".

Insiders have told how the future king and queen have vowed to rip up the royal rule book in the pursuit of establishing this new way, cultivating their image and working on key lifelong projects.

In one report, it was said that William and Kate want to be addressed by name and not their titles.

The couple reportedly is keen to scrap stuffy formality – including curtsies and bows – when on duty.

Meanwhile, one of the mantras the Royal Family seems to live by is "never complain, never explain".

It has been adopted by the Queen for much of her reign, but William could be ready to ditch this when he becomes King.

According to the Daily Mail, William is said to respect the approach favoured by the Queen but thinks the royals should be "agile" if they are to survive.

A source told the newspaper: "The prince believes that for him, the days of 'never complain' are over. He definitely won't be speaking out regularly but believes if the monarchy has something to say, then it should say it.

"He listens to people, he really does and has got a very clear vision for the future. He's very alive to what is modern and relevant and is very thoughtful. He wants to take his grandmother's success and build on it, his way."

Previous : Newborn baby found in wheelie bin on estate ‘doing well’ as locals speak of their shock
Next : Will there be another heatwave in June? Bookies’ odds shorten after 32C highs