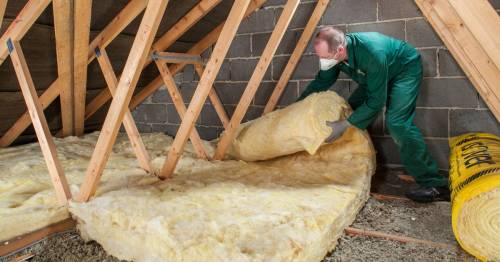 How to check your home’s energy score as Brits face £25,000 improvements bill

Experts say households could face paying as much as £25,000 to make their homes more energy friendly in line with plans set out by the government.

Ministers want as many properties as possible to hit band C on the Energy Performance Certificate (EPC) scale by 2035.

But such upgrades could cost up to £65billion collectively, according to government estimates, with owners of older homes facing the biggest bills.

Your EPC rating dictates how efficient your home is, with an A grade awarded to the properties that are deemed most efficient and G being the least efficient.

The average cost of energy efficiency improvements for a single home is about £8,100, according to a study by Nationwide released this summer.

How the EPC rating system breaks down

That number rises to £25,800 for homes with a F or G energy efficiency rating, its experts said.

However, the Government has denied that it would cost homeowners "anywhere near" these figures quoted.

Sarah Coles, senior personal finance analyst at Hargreaves Lansdown, pointed out some examples of how much it could cost to make your home more energy efficient.

Double glazing starts at £500 per window, so if you have an average size home with ten windows, that’ll set you back £5,000, she said.

“However, if you need to double glaze a large Victorian home with 15 windows that rises to £7,500, and if you want timber sash windows to match the originals, it could set you back more than £20,000.

“Likewise, if you need a new boiler, replacing that could cost £3,500, and if you need to replace radiators you can add in up to £350 per radiator. It soon adds up.

“The eye-watering cost of improving some properties doesn’t come as a huge shock.”

At the moment, properties in England have an average energy efficiency rating of 66 and 64 in Wales, which is both band D.

Have you been quoted a ridiculous amount to make energy improvements in your home? Let us know: mirror.money.saving@mirror.co.uk

New properties built after 2012 score an average of 83, band B, while those built before 1900 have an average score of 54, band E, according to figures from the Office for National Statistics (ONS).

Those built from 1983 onwards have an average rating of band C or higher, and those built before fall short of government targets.

Houses are less efficient than flats, with semi-detached properties in England and Wales scoring an average of 63 compared to 72 for flats and maisonettes.

Depending on the homeowner and their circumstances, such as income and who else lives in the property, there is a small amount of funding available to help with energy costs.

But not everyone will be eligible for these schemes.

Despite the possibility of improving your EPC rating becoming law, research from NatWest shows the vast majority of home buyers don't see their energy level as essential.

Having a C rating was not an essential requirement for 85 per cent of those seeking to buy a new property.

A spokesperson from the Department for Business, Energy and Industrial Strategy (BEIS) denied it would cost homeowners significant amounts to improve their property.

They said: “We do not recognise these figures – in fact our current regulations mean owners of even the least energy-efficient homes wouldn’t face anywhere near the costs quoted.

“Our plan to boost energy efficiency in homes will support homeowners to make changes, and will improve Energy Performance Certificates so they are as effective and accurate as possible both before and after changes are made.”

How do I get an EPC certificate?

An EPC tells you how energy efficient your property is needed whenever a property is built, sold or rent.

They are usually valid for ten years from the date of issue.

If you're a landlord, your property needs to have an EPC available to potential buyers as soon as you start to market your home for sale or rent.

You must get an approved domestic energy assessor to produce the EPC.

If you need an energy performance certificate for your home, you can visit the Landmark website to find a registered domestic assessor in your area.

You can also search through the EPC certificate ratings of other properties in your area for free.

It costs between £60 and £120 to get your property on the EPC register.

Here are the EPC ratings broken down: