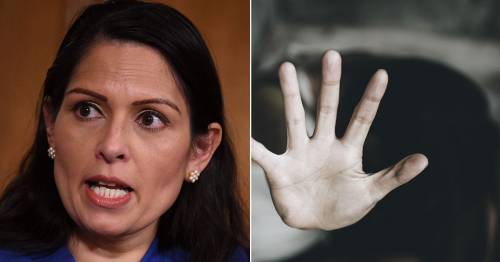 Home Secretary Priti Patel has unveiled the Government's strategy to tackle violence against women and girls – and it has been slammed by campaigners.

Ministers have been under increasing pressure to combat the historic low rate of rape prosecutions and the epidemic of misogyny and harassment faced by, in the vast majority of cases, women.

The plan includes a public campaign “focused on creating behavioural change”, a 24/7 rape and sexual assault helpline and new guidance for schools.

Ms Patel is also looking at outlawing street harassment, such as wolf whistling, and so-called virginity testing, which she describes as "medieval".

The strategy follows an outpouring of grief and anger over the death of Sarah Everard.

The 33-year-old was kidnapped, raped and killed by off-duty Metropolitan Police officer Wayne Couzens in March as she walked home.

Ms Patel said the safety of women was an "absolute priority" for the Government.

But campaigners have told ministers the strategy is not enough to tackle the issue and "system wide" change is needed.

Women's Aid estimates that around £400m is needed to fund specialist women’s domestic abuse services in England, but called the commitments as “small, piecemeal”.

The End Violence Against Women Coalition said there was a " a distinct lack of resourcing here that cannot be ignored".

The strategy includes £5m for a ‘Safety of Women at Night’ fund and other pots of cash ahead of the Budget.

The coalition added: "To make this a strategy that delivers change there must be accountability and the right level of funding that follows all aspects of the work.”

A recent Ofsted review into sexual abuse in schools and colleges found nine out of ten girls had experienced sexist name calling and 92% of girls had been sent unsolicited explicit pictures or videos.

Teachers will get more support to deliver the relationships, sex and health education curriculum effectively.

But the coalition has said it is "concerning that the new curriculum in this area is not giving young people the information they need".

Ms Simon added: "Teachers have not received sufficient training and there is no dedicated funding for experts in the specialist women’s sector who are best placed to deliver training on issues like consent in schools. This requires appropriate resourcing if we are to reverse the normalisation of harmful sexual behaviour in all education settings, which we are yet to see.”

The strategy says little about strengthening sentencing guidelines for judges.

Campaigners had wanted longer sentences for rape, stalking and domestic murder and whole life tariffs for those who rape, abduct and murder.

Shadow Domestic Violence Minister Jess Phillips said: “The services and support required to end Violence Against Women and Girls cannot run on warm words alone. How are we in a situation where we have better protections for statues than for women?"

Her Majesty’s Inspectorate of Constabulary and Fire and Rescue Services (HMICFRS) had called for councils, schools, health and social care bodies and all areas of the criminal justice system to tackle violence against women, underlining police “cannot solve this alone”.

But while the strategy introduces small tweaks in different government departments, there is no "whole system" approach.

Ms Simon, of the coalition, said: "The strategy needs to be ambitious to properly address VAWG across society, it needs to be bold, it cannot claim to be transformative while papering over cracks. We need a strategy that can deliver what women and girls need and the government need to be accountable for what they claim it will achieve."

Ms Patel has said she will appoint a policing lead for violence against women but women's charities say confidence in cops to tackle this issue on their own is low.

The strategy should have focused more on tackling culture within organisations, said Andrea Simon, Director of the End Violence Against Women Coalition.

She added: "A new top policing lead is a step which should be matched by a national strategic priority for police on VAWG, there should be accountability when police and prosecution responses fall way below the standards they should be, and immediate moves towards transforming the culture of our criminal justice system so that it is focused on investigating perpetrators not examining women’s credibility when they report rape."

Women's Aid said it was concerned about the strategy's separation of domestic abuse and violence against women, with two different figures to be appointed to tackle each crime.

The charity added: "Disconnecting the two is a backward step and offers little reassurance that the government’s VAWG strategy will protect women ‘wherever they are’.

The charity said it was "particularly vital" for Black and minority ethnic women, who disproportionately experience so-called ‘honour based’ abuse, forced marriage and FGM.

Unveiling the strategy, Ms Patel has said: “It is unacceptable that women and girls are still subject to harassment, abuse, and violence, and I do not accept that violence against women and girls is inevitable.

“I am determined to give the police the powers they need to crack down on perpetrators and carry out their duties to protect the public whilst providing victims with the care and support they deserve.

“This strategy, shaped by the responses of those who bravely came forward and shared their stories and experiences, will deliver real and lasting change.”

Previous : Pre-wedding pings: Government says you must stop the wedding and self-isolate
Next : List of industries exempt from Covid ‘ping’ isolation to be published today