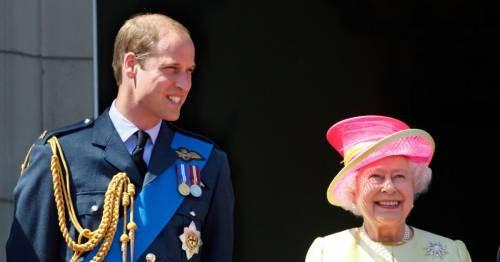 From the day he was born, Prince William has been second-in-line to the throne.

And since that day in 1982, not much has changed in that regard, with his grandmother the Queen still monarch, and his father Prince Charles still the heir.

However, with the Queen now aged 95 and starting to wind back from duties, William has become more and more relied upon by the royals.

Whether it's been involved in family decision-making, handling scandals, or carrying out sensitive engagements, William is often at the centre of it all.

In fact, earlier this week, Mirror royal editor Russell Myers referred to William as a "trusted lieutenant" of the Queen.

Prince William with his grandmother the Queen
(

And here, we look at how he is stepping up within the family…

Harry and Meghan and the Sandringham Summit

One of the first times that William was brought to the fore when it came to royal family decision making was during Megxit.

After Prince Harry and Meghan Markle revealed they wanted to quit as senior royals, a summit at Sandringham was held in early 2020 to negotiate their exit from the UK.

Attending the summit was, of course, the Queen, Harry and Charles – and also Prince William, who was involved in helping come to an arrangement for his brother.

Meanwhile, after Harry and Meghan gave their bombshell Oprah Winfrey interview, it was William who was first to speak out after the couple claimed a royal questioned how dark their children's skin would be.

After being asked if the royal family was racist, William spoke up saying : "We are very much not a racist family."

Another scandal that the royals have recently had to deal with is Prince Andrew facing a sex abuse lawsuit in the United States.

Virginia Giuffre has launched a civil claim against Andrew in a New York court alleging he had sex with her when she was the victim of trafficking. He has always strenuously denied the allegations.

It was reported in the Sunday Times that his siblings Prince Charles, Princess Anne and Prince Edward ruled in a meeting earlier this year that Andrew faces no way back to public life.

Prince Andrew with his nephew Prince William in 2017
(

And it's a topic that William is also said to have made his feelings clear on.

A source said William has been "annoyed" with this uncle's attitude since the scandal has emerged, saying it’s what “really gets” to him.

The source said: “Any suggestion there isn’t gratitude for the institution, anything that could lead the public to think that senior members of the family aren’t grateful for their position, (William thinks) is really dangerous.”

And speaking on ITV's Lorraine, the Mirror's royal editor Russell Myers said: "I think he [Andrew] is the only person in the entire world at the moment who is clinging to the aspect that he could return.

"But Prince William will obviously be taking over one day, I think we've seen him really come to the fore in his new role of being a trusted lieutenant of the Queen and Charles as well.

"What really gets him, was what a source said is Andrew's sense of entitlement and the way he has handled himself throughout this whole saga.

"It does seem like they are closing ranks on him and he is becoming quite isolated."

The biggest health crisis that the world has faced in recent times has been the Covid-19 pandemic.

But rather than being the Queen, it was William who was the first royal to speak to the nation about the crisis.

At the start of the pandemic, he appeared in a sombre video before joining his wife the Duchess of Cambridge to meet staff at an NHS 111 centre.

"It strikes me as interesting that the first member of the royal family to address the nation has been William."

William touches the Western Wall in the Old City of Jerusalem
(

When royal family members carry out any engagements or tours – they are representing the Queen.

And on some of the more diplomatically sensitive visits, it has been William – as well as Kate – chosen by his grandmother as the one to carry them out.

In 2018, he became the first-ever member of the family to travel to Israel and Palestine on official business and was praised for carrying out a successful trip on what could have been a diplomatic minefield.

Additionally, he and Kate were chosen to go on a tour of Pakistan in 2019 in what was described as one of their "most complex" tours to date.

Honours from the Queen

Another sign that the Queen implicitly trusts her grandson was when she awarded him a new role earlier this year.

It was announced that William would be the Lord High Commissioner to the General Assembly of the Church of Scotland – the first time he had been given the honour.

The role saw him act on behalf of the Queen and "maintain the relationship between the State and the Church.

As part of his job, he had to give an opening and closing address to the Church of Scotland's General Assembly.

And in his opening address, he talked about his love of Scotland and the memories he has attached to the country.

He said: "Scotland is incredibly important to me and will always have a special place in my heart."

Not only does William seem popular within in family – but he is also popular with the public.

And with the Queen, 95, appearing to scale down the number of engagements in her diary, William and Kate are stepping up, according to Andrew Lownie, the author of several historical books on the royals.

He told the Express : "We’re in a period of what can be called a soft regency, in effect the Queen is standing back, not doing many roles.

"The roles that she is doing are being accompanied by Prince Charles, everyone is being prepared for Charles and Camilla.

“As a result, William and Kate, who seem to be very popular, are stepping into the position that Charles and Camilla had.

“Because they are, I would say almost more popular than Charles and Camilla, they’ve probably been given a higher role."

Previous : SAP cloud hype leaves its shares in the gutter
Next : Owner’s £600 ‘purebred French bulldog’ turns out to be a completely different breed