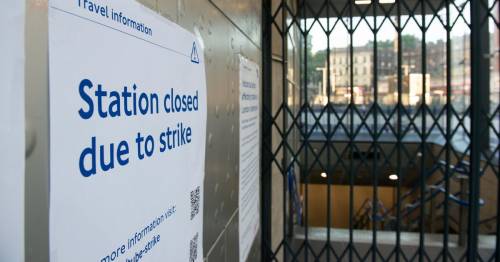 Talks are continuing between union representatives and Network Rail today as the focus lands on the pay of senior rail management.

Network Rail's negotiator Tim Shovell is hopeful of reaching a deal, but the government is reportedly not keen for a rise to go any higher than 3%, with job losses also expected.

Transport Secretary Grant Shapps, meanwhile, described calls for he himself to be involved in negotiations at the table as a "stunt".

One poll revealed a majority of the British public were supportive of the strikes this week as around 40,000 Network Rail staff and those on 13 different train operators walked out in protest over pay, job cuts and pensions.

Network Rail has been denied being leaned on by the government when it was accused of introducing a cap on a pay increase for workers of 3%.

How much do Network Rail bosses earn?

While workers resort to picket lines, directors are earning over several hundred thousand a year
(

The two highest-paid Network Rail directors took home around £1million between them in 2021, despite talks between them and their staff breaking down over pay issues.

There has been plenty of focus this week on how much certain rail staff earn compared to other key sectors such as doctors and nurses, but others have been critical that this focus has not landed on Network Rail bosses themselves.

The government argues staff are earning an average of £44,000, though this includes train drivers. Train drivers are not represented by RMT, but the Aslef union.

RMT union boss Mick Lynch said: "The railways made £500million of profit last year, when fares and passengers were at an all-time low. And if workers’ wages don’t go up it means a transfer of wealth from the poor to the rich."

Will there be more rail strikes?

Further rail strikes are set for June 23 and 25, unless an agreement can be reached between rail bosses and the unions.

Only 60% of trains are running as talks are continuing today in the hope that further action can be avoided and rail services can get back to normal.

A dispute over modern technology is also key, which Network Rail says is for "dumping outdated working practices and introducing new technology". It predicts this will reduce roles by around 1,800.

Dad of two David told the Mirror: "All we want is fair pay. We are not putting a figure on that, but inflation is running at 11%.

Previous : Workers’ real pay will be cut by £470 thanks to Brexit, damning report says
Next : Widow gets £120,000 pay out from NHS after fiancé dies from Covid-19 jab