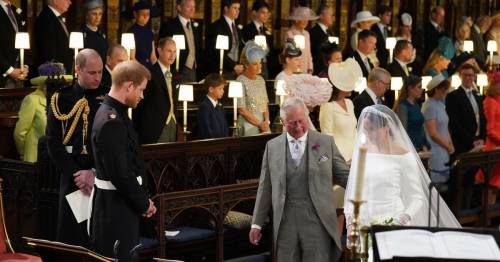 The Duchess of Cornwall played a key role ahead of Meghan Markle’s wedding, gently guiding her husband towards “the right thing to do”, according to sources.

In one of the sweetest scenes from his younger son’s wedding in 2018, Prince Charles stepped in for the former Suits star’s own father, Thomas, and walked Meghan down the aisle.

During the emotional ceremony Prince Harry was seen whispering “thank you, Pa” as he turned to meet his bride.

A source has revealed the touching moment might never have happened had “family orientated” Camilla not stepped in.

The source told Vanity Fair : “I know that Camilla did her best and was a tremendous sounding post and support for Charles, who was deeply troubled.

“When Meghan was going through a difficult time with her own father, Camilla helped navigate things.

“It was Camilla who told Charles that walking Meghan up the aisle was the right thing to do.”

Meghan’s father had hoped to walk his daughter down the aisle but was unable to travel to Windsor in time as he underwent heart surgery days before the ceremony.

He later told Good Morning Britain: “I can't think of a better replacement than someone like Prince Charles.

“He looked very handsome and my daughter looked beautiful with him.

“I was jealous, I wish I had been there, I wish it had been me. But thank God he was there.”

Around 18 months later in January 2020 the Sussexes shocked the world- and the Royal Family- when they announced their decision to step back from duties.

They later moved to the US where they live in California surrounded by Hollywood pals.

The pair have since gone on to sign multi-million dollar deals with the likes of Netflix and Spotify – but have also caused controversy with a number of damaging accusations about their old lives.

She added she believes "there is a need" for them to go back.

Prince Harry and Meghan stepped back from royal duties in 2020
(

Last night it was reported Prince William and wife Kate are set to be addressed by name and not title in a huge shake-up of royal protocol.

The Duke and Duchess of Cambridge want to scrap stuffy formality – including curtsies and bows – when on duty.

A royal source said they were motivated by their disastrous Caribbean tour.

The source said: “They want to be more approachable, less formal, less stuffy and break away with a lot of the tradition.”