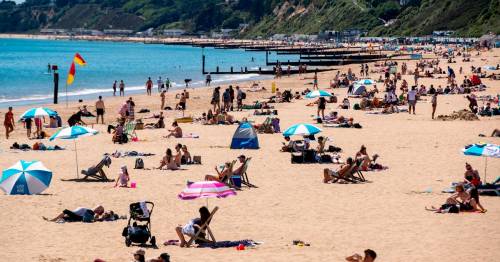 The hottest day of the year has been officially confirmed with Brits sizzling in scorching temperatures.

The temperature reached 30.7C at Heathrow at 11am today, according to the Met Office 's provisional figures.

It beat the previous high of 29.5C, set yesterday in Northolt, west London.

Today's temperatures are expected to climb further in some parts of the country today, with temperatures possibly topping 34C around London and the south east.

The all-time temperature record for the UK sits at 38.7C, recorded at Cambridge University on July 25, 2019.

Today's scorching weather makes parts of the UK hotter than the Sahara, with temperatures in Dakhla, Western Sahara, struggling to get above 23C.

Met Office Deputy Chief Meteorologist, Jason Kelly, said; “The heat is a result of a mix of home-grown warming due to a high pressure over the southern half of the UK, as well as a south westerly airflow bringing warm air, which has been over the continent through the week, across the country.

Staff member David Jimenez erects an umbrella as people take to the water for an early morning cool down at London Fields Lido, in Hackney, east London, on June 17
(

“This is the first spell of hot weather this year and it is unusual for temperatures to exceed these values in June. Some areas may see warm nights with minimum temperatures expected to be in the high teens or even low 20°Cs overnight, especially in urban areas such as London.”

Brits are also warned over very high pollen levels and high UV levels, with people being told they should take extra care if they are outdoors for prolonged periods of time.

On Thursday, the mercury rose above 20C in all four home nations, with temperatures almost reaching 30C in southeast England.

That was trumped today, with some Brits set to bask in temperatures close to 34C.

The sizzling weather isn't set to last too long with today expected to be the peak. A mix of cloud and showers sweeping parts of the UK is due to follow over the weekend.

The BBC's Helen Willetts explained that the hot weather building across the UK stemmed from parts of the Spanish plateau, where temperatures have been topping 40C over the last week.

That warm weather has then made its way across to France, with the nation bracing itself for the earliest heatwave on record.

"Some of that heat is being tapped into and pushing north across the UK," she explained.

Crowds on the beach in Bournemouth
(

An NHS heatwave health alert was also issued for parts of the UK today.

The Level 3 warning is in force for London, the east of England and the south east.

The alert is brought in to try and protect the NHS, with Agostinho Sousa of the UK Health Security Agency (UKHSA) telling BBC Breakfast: "The Level 3 alert is operational and called 'heatwave action'. It is to inform our partners that they should prepare their services for possible increases in demand due to increases in temperatures.

"We also have a Level 2 that is currently active in the South West and East of England that is to inform our partners that they should prepare their services in case they need to enter into action in case we see an increase in temperatures.

"Right now the situation is stable, and we expect the temperatures to drop tomorrow."

Thousands have been soaking up the rays and rushing to beaches to make the most of the scorching temperatures, with lidos across London also heaving with swimmers.

Bournemouth was gridlocked early morning as swathes of beachgoers swarmed the Dorset town, leading to all car parks sold out by 11.30am.

The weather has been so hot that Royal Ascot even relaxed its dress code, with racegoers also allowed to take their own water and soft drinks.

Meanwhile, firefighters are warning that there is an increased risk of fires due to the heatwave and have urged the public to remain vigilant.

Brits have been making the most of the sizzling temperatures
(

London Fire Brigade (LFB) said it has already attended more than 1,430 grass and open land fires across the city this year, and this includes grassland, canal and riverbank vegetation, scrubland, parks, playgrounds, crops and woodland.

Around 350 of these were in domestic gardens and LFB said that with prolonged periods of hot weather, there is a concern these numbers will rise.

In the last five years, London's firefighters have attended almost 600 fires involving barbecues, 45 of which were on private balconies.

The Brigade's assistant commissioner for fire safety, Charlie Pugsley, said: "We want people to enjoy the glorious weather and do so safely.

"Barbecuing on dry grass is reckless and can easily cause a really serious fire – damaging the immediate area and risking nearby properties.

"We're also urging people to think twice about having barbecues on balconies."

Beaches across the UK have been heaving
(

Rain across Scotland petering out as it moves south this morning, followed by sunny spells and a few showers. Breezy with strong winds in north. Dry and increasingly sunny further south and felling hot or very hot.

Cloud and patchy light rain sinking south across England and Wales, but southern areas dry and sultry. Much cooler to north with clear periods. Windy across north Scotland with showers.

Cloudy across central and southern regions with outbreaks of thundery rain, turning heavy for a time. Likely remaining dry and hot in far south with hazy sunshine. Cooler in northwest.

Rain in the far south Sunday, heavy in places. Showers in the north, sunny spells elsewhere. Many southern areas dry Monday and Tuesday, but with rain spreading to the northwest.

Previous : Expert shares advice for owning and caring for cockapoo puppy as interest soars
Next : ‘I’m a 72-year-old Tory councillor and I’ve had to take on THREE jobs to make ends meet’