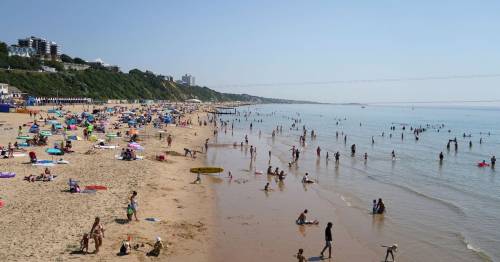 Hottest day of the year CONFIRMED by Met Office as Brits swelter in 29.3C heat

Brits have enjoyed the hottest day of the year with temperatures reaching a sizzling 29.3C.

The temperature has reached 29.3C at Heathrow and Kew Gardens, according to the Met Office.

It surpasses the previous hottest day of the year on Wednesday when 28.2C was recorded at Kew Gardens.

Temperatures were rising today with hot air moving north from Iberia and they will further ratchet up today and tomorrow.

It means with the unusually hot weather for June that parts of the UK will be hotter than the Sahara. In El Aaiun, for example, in Western Sahara it is unlikely to get above 28C on Thursday or Friday.

BBC weather forecaster Tomasz Schafernaker said: “Well we are certainly turning up the heat over the next couple of days.

“For southern parts of the UK this is going to be a short lived heatwave and this is the peak, by Friday, London and the south east up to 33C perhaps even 34C.

“Look at the average we are significantly higher compared to what we would normally see, not unprecedented, the record is actually a little above 35C so we are not actually beating any records but it is not that far away if you think about it.

“Now this is what is happening on the satellite picture. Here is the heat coming in from the south, we’ve got cooler air in the north Atlantic, that cooler air will eventually win. I think that by the time we get to Saturday, into Sunday, things will start cooling off and storms will come our way as well but not in the short term."

There is also a warning for high pollen and UV levels with people told to take care if they are outdoors for long periods.

Mr Schafernaker, looking at Friday's weather, continued: "This is actually going to be the peak of the heat so these south, south westerly winds bring up that hot air from the south, 33C or 34C, all the hot air coming in from France.

"The north west of the country much fresher here, this is that cooler Atlantic air already starting to spread in."

But he added that temperatures will drop over the weekend.

"So come the weekend, whether you like it or not after a hot and sunny Friday, it is all going to go bang," he said.

People sit near a water sprinkler in Soho Square Gardens, central London, as they enjoy the warm weather
(

Unsettled in north, sunny and increasingly hot in south. Today:

Northwestern UK, mainly western Scotland, cloudy with occasional rain, heavier for a time. Scattered heavier showers likely in northeast Scotland for a time too. Most of southern UK seeing plenty of very warm sunshine, though with some high cloud too.

Band of rain sinking south through Saturday, much cooler weather follows. Cloud and rain in the south and far northwest on Sunday fine and dry elsewhere. More settled Monday.