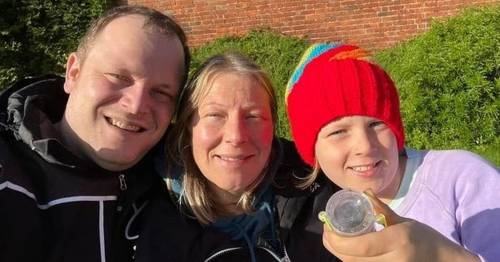 A mum, a groom-to-be and an expecting father were among five people killed in a horror crash – with another two fighting for their lives.

Shocking video footage has emerged of the resultant fireball after two cars collided on the A63 near the East Yorkshire village of Melton on Monday night.

Tributes have been paid to victims Alison Clark, 43, young dad Willie Harty – whose girlfriend is pregnant with his second child, and Lawrence James, who was engaged to be married.

Their friend Sam Connors was also critically injured and remains in hospital.

Tragedy struck as Alison, from Elloughton, was driving her Peugeot 3008 when it crashed with a white BMW 1 series car at around 10pm.

Two other men died and a third is also in a critical condition in hospital after the BMW burst into flames.

Alison Clark was described by husband Rob as a "beautiful soul"

Alison's husband Rob Clark said her sudden death has been devastating for him and their nine-year-old daughter Emily.

He described his wife as a "beautiful soul" and his "guiding star, love and best friend".

He continued: "It is like having your heart ripped out. I can't comprehend it. I keep expecting her to walk through the door. I feel a tremendous sense of loss.

"She was a warrior when it came to looking after people's interests, including our daughter's.

Willie's childhood sweetheart also wrote: "Please God I ask why have you done this to me? I loved you with all my heart Willie. You loved me. We were together nine years.

"We had a beautiful baby girl. She was your life. There were only six weeks left for our new baby girl."

A total of five people died in the crash
(

A tribute to Lawrence, from Leeds, said: "Rest in peace Lawrence James. Keep his little girlfriend in your prayers. They are supposed to be getting married.

"Pray for his family in this hard time. This world is so evil."

While a friend of Sam's added: "Keep Sam in your prayers. He definitely needs them. Don't let another family be destroyed and pray harder than ever for complete and full healing."

Delivery driver Gioele Barresi claims he was overtaken in his van by a white BMW which was coming off the roundabout at the B1231 Melton Road junction "fast and in the wrong direction".

Police closed off the route following the incident on Monday night

He said the vehicle was heading the wrong way onto the A63 and collided with the grey Peugeot.

"I was going about 60 with the van and he passed me on the other side like I was slow. Maybe 10 seconds from that he hit the other car," he told Yorkshire Live.

Gioele said that he saw one vehicle go over the central reservation and flip, while the other was on fire and debris spread across the road.

"A third man was taken to hospital with life threatening injuries, where he currently remains in a critical condition.

"Specially trained officers have been assigned to offer support to individuals involved and their families at this difficult time.

"Investigations are underway into the circumstances surrounding the collision and we would ask witnesses or anyone with dashcam footage from driving in the area at the time to contact us on 101 quoting log 497 of November 22."