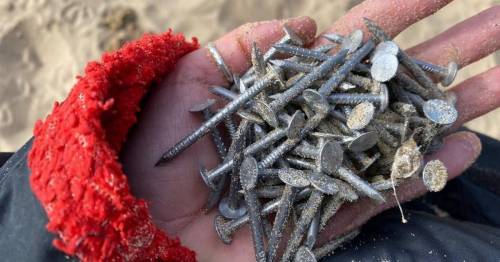 Bathers have been left horrified after discovering thousands of sharp nails and screws scattered across a beach in North Tyneside.

A group came across the hazardous objects – some measuring "an inch long" – while taking an early morning dip at King Edward's Bay around 7am today.

Amongst the swimmers was Mallory Smith, who helped to clean up the litter before filing a report with the police.

She told Chronicle Live : "There are thousands of nails there. People have no idea where they came from. Someone said it looked like roofing nails.

"There are not just one or two but thousands of them. They looked like brand new nails.

"Some were an inch long and if they were pointing upwards and someone put their foot down on them it could have been pretty nasty.

"Lots of people were picking them up and collecting bags and bags full.

"Some of the bags were too heavy to carry. I made a report at 9.30am to the police and dropped one of the bags off at Silverlink Police Station."

The 69-year-old expressed her concern over children being injured (pictured: King Edward's Bay)
(

The 69-year-old, part of a local community group called Totally Tynemouth, expressed her concern over children being injured by the nails, screws, wires and batteries found littered in the sand.

She added: "People are just furious and upset. Lots of people come down with their kids and we were trying to say to the parents to watch their children's feet.

"Hopefully no one was hurt."

Previous : ‘I died from sepsis and looked down on my body as doctors brought me back to life’
Next : North Korea mystery as hundreds infected with ‘stomach disease’ forced to quarantine – World News