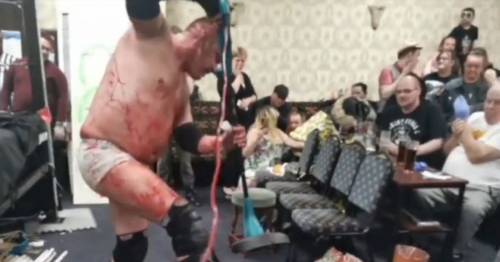 Families were left cowering for cover as two bloodied wrestlers attacked each other with a garden strimmer and glasses among other weapons in a “death match”.

As a crowd of around 80 watched on, their match “escalated” as both men left the ring and attacked each other with an assortment of weapons, including a hedge trimmer.

The violence was witnessed by families, including children, just a few feet away.

Durham Police confirmed an inquiry into the match has been launched, Chronicle Live reported.

Around 80 people, including children, witnessed the bloody match
(

Twitch streamer and wrestler Benji said of the event: “[In] the videos I’ve seen there was a mother shielding their child’s face as glass and blood went everywhere.

“CCW didn’t hold their hands up, they said the fans liked it, the venue didn’t mind and the wrestlers went into business for themselves and it got out of hand.

“I know workers who do death matches properly, in front of the correct audiences and as safe as possible.

“Probably going to get a lot of heat from people in the industry for whistle blowing but I had to do something about this.”

The event was similar to hardcore matches made popular by the likes of WWE and ECW in the 1990s and 2000s as the likes of Mick Foley and Crash Holly attacked one other with weapons such as steel chairs and wood wrapped in barbed wire.

A number of attendees complained about the recent match to the local authority.

Joanne Waller, Durham County Council’s head of community protection, said: "We can confirm we have been made aware of concerns about a wrestling event at New Seaham Conservative Club on April 29.

“Our licensing and health and safety teams are currently investigating and it would be inappropriate to comment further while these enquiries are ongoing."

The event was advertised for families, including an offer on tickets

She added: "The event went absolutely brilliantly, it was fantastic. The guys who were here cleared up every inch of mess and offered to come back the next day with a carpet washer and wash all of our carpets and you wouldn't even think they'd been by the time they'd left in the evening.

"Everybody loved it and said when are they going to be coming back.

"We'd love to get them back because they were absolutely brilliant and I know they're up at Murton either next month or the month after and they've sold out all of their tickets so if there was a problem with this company I can't imagine they would sell out of all of their tickets.

"The feedback that we've had from our members is that it was a fantastic night.”

The BBC reported promoter James Barrass of CCW apologised, adding: “Things can sometimes not go to plan. Obviously there was a little bit more that went down.

Wrestler Benji spoke out against the death match
(

"I spoke to the two guys afterwards. We had discussions and obviously that will not be happening again."

A Durham Constabulary spokeswoman said: "We are working with Durham County Council's licensing team after a number of complaints were received by the local authority in relation to an event at Seaham Conservative Club on April 29.