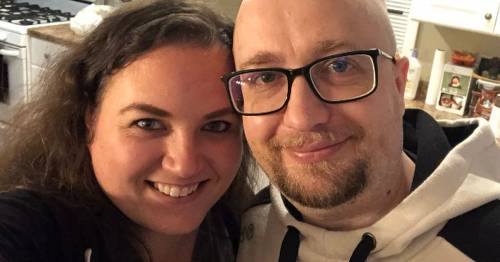 Every moment of Jon Hill and Stefanie Harbeson’s romance has happened online, from meeting on Twitter to getting engaged.

But one Zoom call almost took a deadly turn in March, when Jon, 37, had a stroke on screen as his fiancée watched helplessly from the other side of the world.

They “met” in February 2021 when American Stefanie, 35, tweeted about a nightmare she’d had – and Jon responded from the UK.

She wrote: “The other night, I had a majorly f***** up dream. I want to share but don’t want to tweet it… Anyone want a scary story in their DMs?”

Jon, a robotics engineer from Gloucester, replied: “I’m game. I’ve got one I can share in return…”

Jon proposed after his health scare

A private message followed, and the pair hit it off. Instructional designer Stefanie, who lives in Pittsburgh, Pennsylvania, says: “Soon, we were messaging all day long. Jon was funny, kind and smart and immediately felt like a friend.”

The couple were more than 3,000 miles apart and Stefanie hadn’t even heard Jon’s voice but she knew was falling for him.

In March, she told Jon she had a crush on him and after learning he felt the same way, they had their first official Zoom date.

“We’d planned to watch a movie but the conversation flowed so easily, we just talked for six hours,” Stefanie says.

“From then, we were speaking daily. We played board games, took virtual tours of museums and watched films.

“I knew that I was falling in love with Jon, but wanted him to say it first! When he did in early May, I was thrilled, and replied right away that I felt the same.

“Falling in love with a British man who is half a world away? It was like something out of a romance novel.”

Covid restrictions meant the couple couldn’t meet in real life for months. But in January this year, Jon flew to the States where Stefanie waited nervously at the airport to meet him.

She says: “We’d even planned our first kiss! We both had to wear masks at the airport so we decided to wait until we were at my home. As our lips touched, it felt like a movie where the rest of the world just fades away.

“Jon stayed for a month and it felt like a dream. It was surreal and amazing to have him there, by my side, after all that time. I even met his parents over Zoom. It was so hard when Jon left, but that just confirmed how strongly we both felt.

Excited about their future together, the couple started planning for Stefanie to visit the UK in June.

They were due to talk about the trip during their Zoom call on March 20. “Then, all of the sudden, Jon got this dazed look on his face,” Stefanie says.

“I just felt funny,” Jon recalls. “I noticed my arm was weak and I was slurring.” Hearing Jon’s garbled words, the horrible reality also began to dawn on Stefanie, even before he said: “Babe, I think I’m having a stroke.”

What happened next was a waking nightmare – especially when Stefanie realised she couldn’t call an ambulance because she wasn’t in the UK.

Jon in hospital on the first day he could sit up

“I was terrified,” she says. “I thought I was watching the love of my life die on the other side of a screen and was powerless to do anything about it.

“I tried to stay calm and, as Jon called 999, I phoned his parents, who thankfully were only 15 minutes away.”

Jon insisted on leaving his office to open the front door for the ambulance crew. “He stood up and suddenly fell out of view,” Stefanie recalls.

“I heard numerous thuds, a yell and then silence. I thought Jon was dead at the bottom of the stairs – that I’d lost him before we even got to begin our life together.”

“That’s when I put myself on mute and broke down,” she admits. “The ordeal felt like it had lasted hours but it had only been 30 minutes. It was the longest half-an-hour of my life.”

Doctors didn’t know if Jon would make it through the night so Stefanie anxiously waited for news.

“Finally, once he stabilised two days later, I was able to speak to Jon on Zoom,” she says. “Seeing him on screen I was hit by both huge relief and terror.

He was alive, but still in critical care. All he kept saying was, ‘I love you so much…’ He doesn’t remember that call but I don’t think I’ll ever forget it.”

Meanwhile Jon, who had ordered a ring to propose to Stefanie when she visited England, decided he couldn’t wait to ask her to marry him – even though he was still in hospital.

“Stefanie is absolutely wonderful, smart, caring, kind and creative,” he says. “The stroke made my feelings for her even stronger. I wanted the ring on her finger to make it official.”

Jon arranged to have the ring posted to Pittsburgh and instructed Stefanie not to open the package until they were on Zoom together. Ten days later, Stefanie sat in front of her computer and slowly unwrapped the parcel.

“Jon said, ‘Stefanie, my love, will you make me the happiest man in this hospital? Will you marry me?’” she recalls. “With a big smile on my face and tears in my eyes, I said yes!’

“Being proposed to over Zoom while my beloved is in a hospital bed on the other side of the Atlantic is definitely not the proposal I would’ve imagined, but it’s our story and it’s unique. It felt perfect.

Stefanie was horrified but powerless to call an ambulance

“He was smiling, I was smiling and I wanted so badly to wrap my arms around him and kiss him.

“I’ve learned so much through this experience – that strokes can happen to young people like Jon, but also how unpredictable and precious life can be.”

Five weeks after being admitted to hospital, Jon was well enough to return to his parent’s house.

“Stefanie is my motivation to get better,” he says. “We’ve booked our wedding in Devon in August.”

The couple plan to settle in the USA when Jon is fully recovered but in the meantime, they have launched a GoFundMe page to raise funds for Stefanie to visit her fiancé in the UK.

While technology has brought them together, the couple are planning to keep their wedding traditional. “We’ll be saying our vows side-by-side!” Stefanie laughs.

Previous : Ukrainian drone ‘destroys’ Russian ship delivering missiles to occupied Snake Island – World News
Next : Bloke who fell in love with own mum confessed to wife they have ‘mind-blowing’ sex