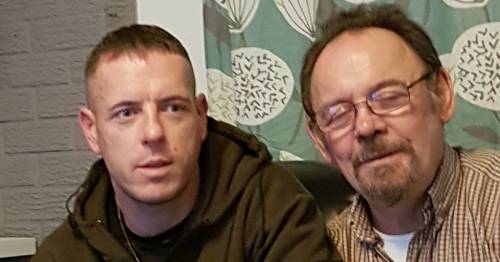 A man was knocked unconscious in a pitch black water slide after a swimmer hurtled into the back of him.

Lee Giles has spoken of the horrific incident claiming he was almost stationary inside when he was hit.

The 41-year-old claims he was inside one of the twin flumes at the newly-opened Moorways Sports Village when the impact forced him upwards.

It caused him to hit his head hard on the roof of the flume.

Mr Giles says he managed to reach the end of the tunnel only – but the same person crashed into him again forcing him to hit his head for a second time, DerbyshireLive reported.

He said he got to his feet for fear of further injury and almost immediately collapsed unconscious.

The incident was witnessed by a family who were visiting the pool for the first time, just over a week after the £42million swimming and fitness complex opened.

Lee, who lives in Allenton, is unhappy about the treatment he received from Moorways staff.

He claims they got him to the first aid room and found it was cold.

He said they took around 20 minutes to work out how to use an ice-pack on his injury, by which time he says he was vomiting and feeling very ill.

The 41-year-old said he continued to vomit that night and was ill for a couple of days, during which time he saw his GP who gave him medication and suggested Mr Giles went to hospital but he decided not to.

Lee said: "I am really disappointed that no-one from Moorways checked to see how I was and also when I went to talk to the management about the situation last weekend and my thoughts about safety.

"I was fobbed off totally. I am really concerned that a child could be seriously injured or worse if it was to happen to them."

He said that problems began after he and his 14-year-old son went to Moorways and they decided to go on the flume.

Lee said: "I started off down the chute and the water was very shallow and I was not moving very much.

"So I started trying to push myself along but before I moved much a man, who I think weighed about 18 stone, came down and hit me.

"It all happened in total darkness and was horrific, as I hit the roof of the chute with the top of my head and lost conscious and then I found I had slid down the chute and found myself at the bottom as I came to.

"But before I could move, I was hit again and once again hit my head.

"I got up as quickly as I could and tried to get out of the water and collapsed. The next thing, I was being escorted to the first aid room.

"The next minutes were a nightmare, as staff got on radios to ask what to do, I felt increasingly sick and vomited into a bucket and being only dressed in my swimming shorts, I was very cold as shock set in."

Lee said he remembered asking staff what the the process was for stopping people coming down the chute until people have exited.

He said: "In many places there are sensors and cameras which mean people can see if people have still to emerge from the flume.

"It seems there is just a red light and then a green light for go after a set period of time, which is established after sending a member of staff down 20 times and working out an average time it takes to go down, I was told.

"But what happens if you are stuck like in my case – there are going to be accidents and if someone had run into a child the same as ran into me, they could have been killed.

"I recall that some paperwork was filled out and eventually the ice pack was activated after about 20 minutes. I was escorted to the reception area but had to be helped to a chair.

"My main concern was to get my son home so gradually we headed for the house about a quarter of a mile away but I had to stop quite frequently.

"I was sick all night and not really making much sense but eventually just slept.

"It was about five days before I felt better and in the meantime I had seen the GP who wanted to send me to the hospital but by that time it did not seem worth it."

Lee was concerned no-one checked on him from Moorways.

He said: "In the end I called Moorways and arranged to meet someone from the management last Sunday.

"But I may as well not have bothered – no-one was interested – and I was told it had been 'handed on to health and safety' but I don't know what that means.

"I am so disappointed no-one is listening to me and the safety worries I have expressed."

Management at Moorways have defended staff actions and also the way the flume ride is operated, stating it is run "in line with the manufacturers' guidelines".

Simon Morgan, contract manager for Moorways operator Everyone Active, said: “Colleagues were alerted to an incident involving a customer who suffered a head injury following a collision on one of the flumes at Moorways Sports Village.

"The customer was treated by a first aider with an ice pack and a call to the emergency services was offered, which was declined.

"The incident was then investigated in line with corporate health and safety procedures and the customer was encouraged to contact the site in writing with any concerns.

"The health and safety measures for all the flumes at Moorways are in line with the manufacturer’s guidelines.

"The safety of customers is our priority and a leisure attendant is on duty at the entrance to the flumes at all times.

"The flumes use a traffic-light sensor system which helps the attendant inform customers when it is safe to enter the flumes, and the quantity and speed of the water flow is set and monitored."

Everyone Active operates the venue on behalf of Derby City Council, which did not not comment on the incident.