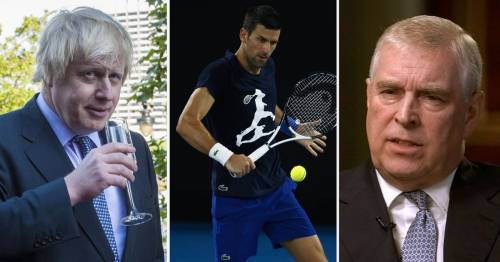 ‘Hoorah! It’s been a fantastic week for rich, entitled men getting their comeuppance’ – Polly Hudson

There’s a moment, growing up, when every child realises a harsh truth, and the world is never quite the same afterwards: life’s not fair.

After a strict diet of fairy tales and movies where the baddie loses in the end every time, it can be a pretty bitter pill to swallow. In reality, good doesn’t always triumph over evil, nice guys regularly finish last, and those who deserve it least are often the most rewarded.

So this is a time for genuine celebration – we need to pause, take notice and appreciate something very unusual. A magical hat trick of justice. This has been a fantastic week for rich, entitled blokes with seemingly unbreakable senses of their own exceptionalism finally getting their good, old fashioned comeuppance. Hoorah!

Prince Andrew (or, whatever we’re meant to call him now he’s been stripped of all his royal gubbins – a Madonna-esque just Andy?) has learned that he can’t hide behind his mum’s tiara forever.

Prince Andrew is facing a civil sex abuse trial, the allegations of which he strongly denies
(

It looks likely he will face a civil sex abuse trial, just like any other human being on the planet. On the bright side, if any news was ever going to cure his medical inability to sweat, it’s presumably this.

There’s “No-Vax” Djokovic who is having the opposite of a wizard time in Oz, where he had rocked up to play in the Australian Open. The law is that you must be vaccinated to enter the country, but they don’t mean him, right? He’s special. And for a while it seemed like it was going to be advantage Djokovic, the oldest story in the book, loaded spoilt brat gets to do whatever he wants. But nope, common sense seems, at time of typing, to have won in the end. Out!

And then we come to our shameful, shameless Prime Minister, who has been shown up for yet again deciding that the rules he set for the rest of us didn’t apply to him and his cronies. Party on, doofus!

This appalling, dishonest, hypocrite not only thinks he’s above the general public, but also apparently the Queen, who happily stuck to the restrictions on the unhappiest day of her life when she laid Prince Philip to rest. Johnson was forced to offer a weak, excuse-laden apology-lite this week, served with a side order of ludicrous lies about not knowing what a party is.

Boris Johnson's premiership is hanging in the balance
(

No point in asking what kind of fools he takes us for, because he answers with his every action.

It’s hard not to hope that the realisation that’s not true, and subsequent fall from grace, is exactly as painful as it should be.