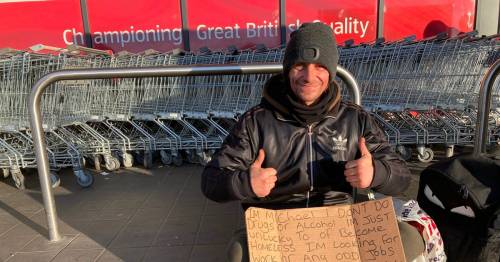 A homeless man finally has a roof over his head thanks to a homemade sign and the kindness of strangers.

Michael Bucknell has had a tough time since he's been on the streets of Wakefield.

People have shouted at him, spat at him and accused him of being a drug-addict, Yorkshire Live reports.

Michael he said he has struggled with money and difficult landlords that have made it hard to hold down a place over the years.

"I don't like begging – I find it quite degrading. I've been spat on, punched, accused of only asking for money to take drugs," he said.

Do you have a story to share? Email webnews@mirror.co.uk

Michael wanted to explain his situation
(

"I'm just someone that's fallen on hard times – I've been up and down throughout my life and I've just been wanting somewhere to call home recently.

"I said to myself: 'I want to be off of the streets before Christmas' and now people have given me that Christmas present."

Tired of being shouted at, Michael made a sign and brought it with him to where he sits outside Wakefield Aldi.

The sign reads: "I'm Michael, I don't do drugs or alcohol – I'm just unlucky to of become homeless. I'm looking for work or any odd jobs. Thank you for your help and kindness, Michael."

He was approached by a woman named Mollie May who shared his sign on Facebook and encouraged passers-by to give him a chance or let her know if they could offer him any work.

While Michael hasn't yet managed to get a job – more and more people have stopped to donate to him or grab him something to eat.

He raised £150 and took it to Dominion Housing Services, which provide unemployed people with housing in Wakefield.

He has been given a place to stay, and is now hoping to furnish it with some essentials such as a toaster and a TV if he can raise the funds.

"I'm starting from scratch, but I'm working my way up," he said.

"It's a fresh start and I hope it will be a new chapter of my life. It feels brilliant – I can't thank the public enough. They helped me in a big way.

"Now I'm off of the streets I'm going to grab this opportunity with both hands and not let it go."

Previous : ‘Nurses said I was an attention seeker and didn’t believe me – until I was paralysed’
Next : Sri Lanka begins trials connected to 2019 Easter bombings case